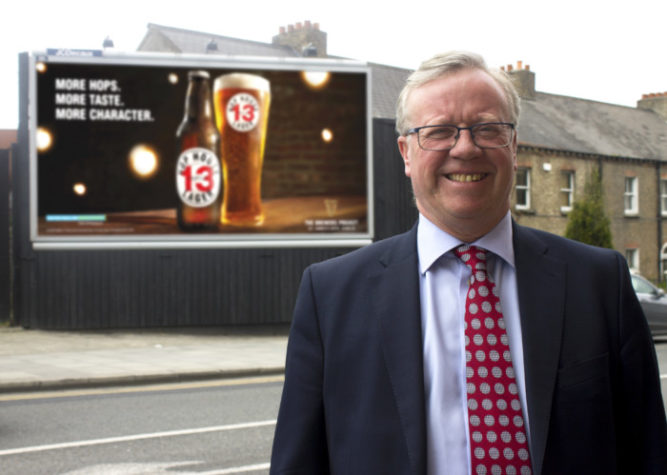 Last year UK-based Posterscope bought PML Group, Ireland’s top out of home (OOH) specialist, for an undisclosed sum. Once all the t’s are crossed and i’s dotted PML will join the Posterscope network, owned by Dentsu Inc. PML was started in 1982 by Jimmy Cashen, above, and the late Gerry O’Donoghue, to compete with Outdoor Advertising Services (OAS).

The Posterscope deal marks something of a reversal, as eight years earlier PML bought out its Irish operations after protracted negotiations. PML – aka Poster Management – has offices in Dublin and Belfast and comprises PML, Source and the Poster Audit Bureau. Cashen will remain on as group MD, reporting into Posterscope’s global president, Annie Rickard.

When PML began, outdoor ads were called posters or billboards. Now out of home (OOH) is all the go. Cashen looks back with little satisfaction to when the contractors took short cuts with the planning rules. No more. The big worry for the business now is town planners who believe the great outdoors are set to resemble Las Vegas with neons at every turn.

PML puts Ireland’s OOH ad spend at €72 million, while Nielsen’s estimate is €107m. The reason why the figures clash is down to how the data is sliced and diced – basically, rate card values versus reality. Cashen believes the French-owned JCDecaux, Exterion Media and Clear Channel have become far slicker and continue to invest handsomely in new plant.

PML annual review shows OOH again grew by six per cent last year. Aside from economic factors, Cashen puts the increase down to the medium’s ‘always on’ nature, improvements in plant quality, format flexibility, innovation and creativity. Diageo was the top spender with a market share of 4.6 per cent, well ahead of second placed McDonald’s on 3.2 per cent.

The top three was completed by Eir, including campaigns for the rebranding from Eircom and for their youth targeted mobile brand, Meteor. The three advertisers increased display values by between 20 and 30 per cent last year, compared to 2014. Telcos Eir, Three and Sky accounted for over 10 per cent of all OOH and ended 2015 as the top spending category.

Cashen is concerned about what lies ahead for alcohol advertising. As things stand, alcohol is about 12 per cent of OOH spend – “still very significant”. Advertisers have been working on a programme since 2005, with a strict voluntary code in place. “The media owners have honoured the code and it’s a surprise there’s a change – but we’ll have to wait and see.

“What’s proposed by (former Health Minister) Leo Varadkar is unworkable. He want sites with alcohol ads to be 200 metres from a school. That will cut out most of outdoor. There’s no science behind the 200m – it’s just a figure that was picked randomly. While it’s not an overt ban, it’s a ban… basically. I expect everyone in the business will fight it.”

Digital now accounts for 11 per cent of activity in Ireland – a major shift in advertiser behaviour considering just six years ago it had only one per cent of spend. Referred to in the business as DOOH, advertisers are catching on to the idea as campaigns are networked, scheduled and more targeted. There are now 2,300 DOOH screens in the Republic.

For instance, luxury perfume Chanel uses pods to target shoppers in Dundrum Town Centre and Liffey Valley. “Hats off to Exterion for how it improved the DART service with its CommuterSquares,” Cashen says. “JCDecaux last year rolled out its backlit Premiere sites – offering superb standout for brands.” The late Jerry Brannelly, co-founder of DDFH&B, was credited with launching the T-side on the outside of buses while at Lintas in the UK.

Last year, Exterion Media went a stop further by rolling out the larger Capita T across driver sides on Dublin Bus. The new format extended the old T-side by 46 per cent. Cashen makes the point that DOOH promotes campaigns with short lead-in times. It allows advertisers fashion consumer messages depending on the time of day or latest weather conditions.

Santa Rita wines alternated between two posters – one ad ran when the sun came out and the other when it rained. Speaking at a PML agency breakfast, Exterion Media’s Antoinette O’Callaghan said the digital screen is neither a TV ad nor a poster – but a combo of the two. It works off PDQ – pretty damn quick – in reaching 2.7 million consumers a week.

Digital’s growth is good news and it’s not at the expense of cannibalising other spend.

PML’s Northern Ireland office saw to it that Danske Bank made DOOH history at the start of the year. The Danish bank became the island of Ireland’s first digital roadside advertiser with the screen at Shaftesbury Square in downtown Belfast. Measuring 30 square metres, the site delivers over 75,000 daily impressions, targeting several lanes of cross city traffic.

DAA is the newest DOOH entrant with its AerPods at Dublin Airport. Further growth will be linked to mobile phones. As people are out and about, they will interact more with sites and avail of offers using QR codes, NFC and Beacons. Brown Thomas might text people with a special one-day offer on designer wear. Eye recognition advances are in the pipeline.

National road networks which receive EU funding are not allowed have billboards. What about the argument that OOH does not give consumers returns in the same way as TV, radio and press? Cashen believes posters are a pure advertising medium and don’t pretend otherwise. He sees that as being a major plus. Advertisers must rely on TV ratings.

Never one to sit on their laurels, Cashen and his marketing team push out ideas to promote OOH. Poster Impact is a regular research feature in Marketing.ie which PML launched with Ipsos MRBI back in 1996 to measure the medium’s effectiveness to advertisers. Twenty years later, 110,000 Dubliners have shared their opinions on over 15,000 campaigns.

Cashen expects to remain on at PML after the buyout is complete in 2019. “These are exciting times for OOH and I’d like the medium’s transformation to be my legacy when I hang up my posting brush,” he says. A regular at Old Trafford, what would also keep him smiling would be to see his beloved Manchester United win the Premier League again.