As the economy picks up, companies looking to attract the brightest and best are turning to perks to clinch the deal. Today’s perks have swung away from a golf club membership to something more holistic and contemporary. Jobs.ie notes that Irish companies have joined multinationals in offering catered meals, gym membership and team bonding events.

If you like your perks a little quirkier, you might hold out for beer fridges, on site massages, music rooms or yoga classes. As employers demand more from staff for hours worked and always-on availability, Jobs.ie’s Chris Paye believes perks help to reduce stress and offset personal costs. But while perks are attractive at the outset, they quickly become the norm.

The best way to keep people motivated is to offer incentives on a random basis. That way they remain novel and engaging. We are quick to assimilate what at first look like cool perks into our routine. Over time, burn out caused by being asked to stay late or work weekends on a regular basis leaves the perks looking a lot less attractive than they seemed at the interview.

A survey for Vodafone shows that work-life balance (37 per cent) and job satisfaction (26 per cent) are the most important elements of a job for graduates. Salary comes in at 21 per cent. The study of 15-24 year olds indicated that marketing and advertising, communications, education, IT and software development are the most desired sectors in which to work.

The research is a nice snapshot of the views of those about to enter the workplace. It would be fascinating to see how these views change after a few years’ experience in a career. Will salary become more important as the world of mortgage repayments and childcare kicks in? Will work life balance become a mirage in the desert of overtime and deadlines?

Will job satisfaction be a distant memory, or an ideal to be pursued through dedication to personal passion and entrepreneurial drive? Maybe Vodafone will follow up with surveys among older age cohorts to build a picture of how youthful idealism fares in the real world. 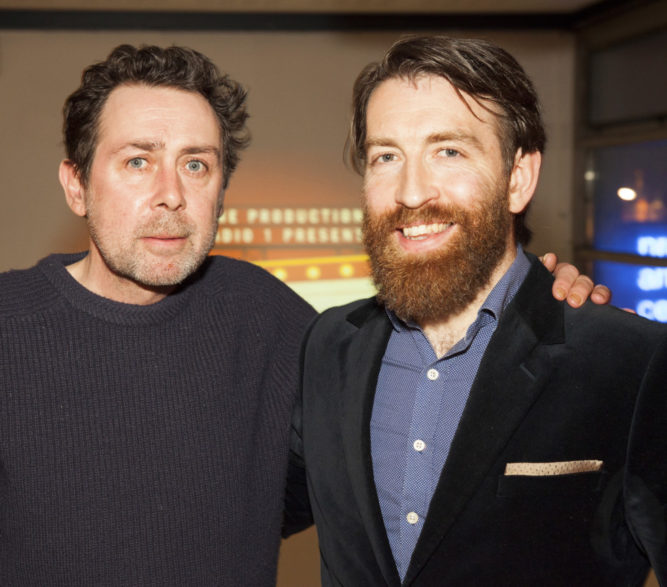 Christmas craic: Stand-up comic and writer Colm O’Regan is the guest speaker at this year’s Marketing Society Christmas lunch in the Shelbourne. O’Regan, right, with the late Seán Hughes, handed out gongs at the Just Eat National Takeaway awards, has written four books, the latest of which is entitled Bolloxology, “a good-humoured rant about the modern world”.

When I worked in DDB London, Heinz was one of our big clients. Whenever he made a speech about creativity and problem solving, our MD used to hold an open bottle of Heinz Ketchup upside down over his notes. The audience would at first find this a bit weird, then start to get anxious about what would happen when the ketchup started to flow freely.

Alas, it was not to be. Hold up a bottle of Heinz ketchup back in the day and it went nowhere. You had to give it a really good shake and then hit it a few sharp thumps before you could get it onto your plate. In research, people used to say it was a problem. The ketchup was so thick it would not flow. If you hit the bottom of the bottle too hard, it went all over the gaff.

Heinz were adamant that they were not going to dilute the quality of the product to make it flow easier. So there was a bit of a stalemate between them and the marketing and agency people. In the end, creativity came to the rescue by making the ‘problem’ a strong brand USP compared to more liquid rivals, with ads around the things people to free the ketchup.

It was not the greatest advertising ever made but it serves to indicate that sometimes what looks like a problem can become a strength without having to compromise on strongly held values. An opportunity to make a virtue out of what might at first appear to be a problem can come from negative consumer feedback if the right minds are applied to the process.

People complain about the split personality that exists in banks. They operate to two sets of cultural norms. On the one hand, you have the good cop represented by the advertising and marketing function who love bombs you into dealing with them. On the other hand, you have the bad cop who harasses you with phone calls and nasty letters if you run into a problem.

It was always thus and probably always will be. But surely it would make sense for both parties to sit down and agree some way of doing business in which the good cops would create expectations they can fulfil and the bad cops would take a few courses in being human. A top military ‘intelligence gatherer’ once said he always got better results with a packet of cigarettes and a pot of coffee than with a baseball bat. Try a little tenderness folks.

Comments on this article are welcome at colm@theresearchcentre.ie