A quarter of Kenny listeners could defect to Newstalk 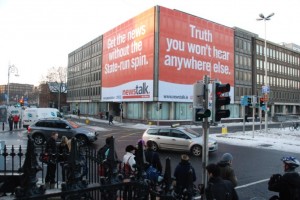 Research conducted this week by Core Media claims that a quarter of the current Pat Kenny audience on RTÉ Radio 1 is at risk and could move over to his new show on Newstalk. This increases to 52 per cent of Kenny listeners when those who are ‘somewhat likely’ to move channels are included. Based on how people feel, this could now mean at least 70,000 new listeners for the station, Eddie O’Mahony, trading director of Core, said.

It clearly puts Newstalk on another level with potential listeners and more than doubles the existing audience for the time slot.  The research also points to a potential knock-on effect on the other shows in the Newstalk schedule due to Kenny’s move to Digges Lane. O’Mahony said the study was conducted at the peak of publicity surrounding the Pat Kenny move and in advance of any confirmation of the replacements or possible new morning line-up on RTÉ Radio 1 as this will no doubt have an impact on these findings and opinion. Radio is also a habitual medium and moves like this usually take time to realise their full potential, he added.