Sponsorship: A question in sport

At time of going to press, word has it that the Government plans to make the RBS Six Nations rugby championship free to air to prevent cable and satellite sports channels from buying exclusive rights to live coverage from next year. The issue came up shortly after Ireland beat Scotland to win its second Six Nations title in a row.

Communications Minister Alex White wants the tournament to be on a list of sports events designated for live broadcast by terrestrial channels. The Designation of Major Events Order 2003 strikes a balance between allowing as many TV viewers access to major sports while avoiding substantial financial loses to sports bodies like the IRFU.

As things stand, the Six Nations is designated free to air only for deferred TV coverage. RTE pays €4.1 million a year for live broadcast rights while the IRFU gets €13.6 million in fees. Come the autumn, all eyes will be on TV3’s coverage of the Rugby World Cup as it kicks off on September 18 when England host Fiji in Twickenham. 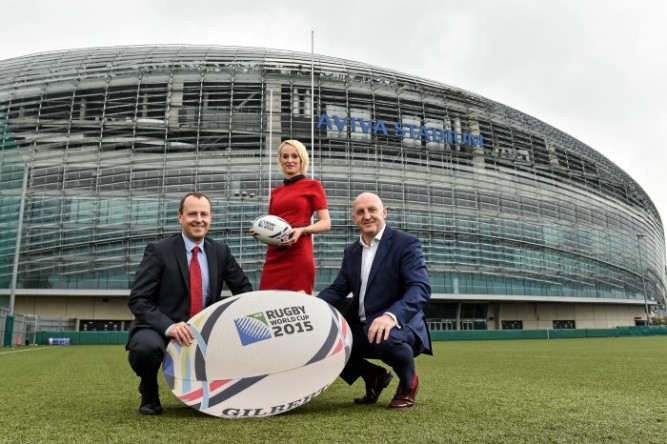 Major draw: All eyes will be on TV3’s coverage of the Rugby World Cup as it kicks off on September 18 when England face Fiji at Twickenham. TV3 could net up to €6 million in advertising revenue from the seven-week competition. But the devil is in the detail and sponsorship activation is key. Pictured are TV3’s Niall Cogley, Sinéad Kissane and Keith Wood.

TV3 is offering tier-one premium packages to advertisers each costing €150,000. Ads will run around 18 key matches, including Ireland’s games and the semi-finals and final. All 48 matches in the tournament will be shown on TV3 and 3e. The broadcaster is selling the mobile and big screen rights for the Irish markets.

The basic package includes 94 x 10 second stings, 640 x 5 sec stings, 160 x 2 sec stings for a price tag of €450,000. The package covers broadcast, digital sponsorship and social media activation. The sponsor will own the dedicated TV3 World Cup site with click-through to their site and featuring on all the games streamed live.

TV3 is expected to net up to €6m in ad sales from the seven-week competition. But the devil is in the detail and sponsorship activation is key. Will use of Keith Wood, Stuart Barnes, Matt Williams and Shane Jennings be included? What activation rights off-air are there? Is ticket access for consumer/trade promotions included?

Golf’s oldest and most revered championship tournament, the British Open has already been snapped up by Sky Sports, despite the R&A saying it could never happen. From next year, the Open – as it now branded – will see its audience considerably reduced, which will impact on its marketing and sponsorship value.

Staying with golf, Eircom Business Solutions has again signed up as a sponsor of the Irish Open. Over 80,000 visitors are expected to show up at Royal County Down at the end of May, with an audience of millions worldwide watching the action on TV. The Irish Open has floundered for the last number of years with it flip flopping between the North and the Republic, propped up by Tourism Ireland’s support.

As a global showcase for Ireland it works really well but its ability to command prime time TV has diminished over the years due to the quality of the field. With sponsors like Eircom investing, the tournament can attract a better quality field and become a premier TV event again with consequent returns for the official sponsors.

The preoccupation with cash and short sightedness by interested parties is bewildering. They argue that by more money going into the sport it helps with development. Yet when a sport goes pay-per-view it loses viewers and the next generation doesn’t get a chance to buy into the game. Sadly, it’s a lose-lose.

Liam Gaskin is partner at The Concept Partnership marketing consultancy