Adman made of write stuff

In a new series, John Fanning profiles leading admen who were also adept at writing books. First up is David Ogilvy 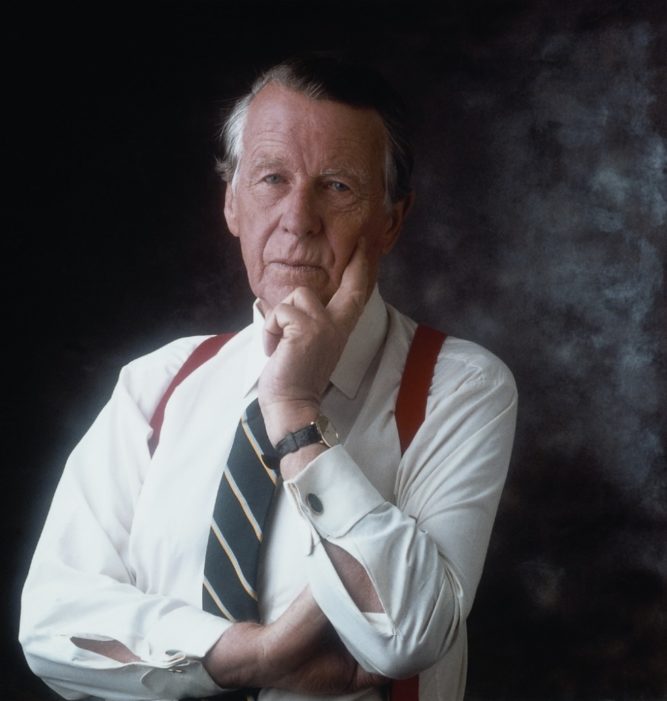 David Ogilvy (1911-1999) is arguably the most famous adman of all time. It is partly due to his consummate skills as a creator of some of the best campaigns of the 20th century and founder of one of the most successful global agencies but also because he practised what he preached, creating a powerful personal brand for himself through his own writing.

Ogilvy’s Confessions of an Advertising Man have sold over a million copies since 1962. Readers hoping for salacious gossip suggested by the title would have been disappointed; it is a very factual, albeit well-written, account of running an ad agency. The fact that it was written only a few years after he started the agency, when he was in his late thirties, suggests that his experience of life up to then must have played a critical role in his later success.

And what a life. Born in Surrey to an Irish mother and a Gaelic-speaking Englishman of Scottish ancestry, whose financial business collapsed in the 1920’s depression necessitating a life of genteel poverty for the family. Ogilvy gained a scholarship to the elite Edinburgh public school Fettes and another to Oxford, but he dropped out without qualifying.

In 1931, he began working as an apprentice chef in an exclusive French hotel restaurant. There he witnessed a head chef engage every day with the difficult task of directing a team of talented headstrong individuals in the creation of award-winning dishes. He returned to Scotland as a door-to-door salesman for Aga cookers where his acute sense of the psychology of selling led to his being asked by his boss to write a sales manual for staff.

Thirty years later, Fortune magazine reckoned it was the best of its type. His concluding line does stand the test of time; “The good salesman combines the tenacity of a bulldog with the manners of a spaniel. If you have any charm; ooze it”. In the late 1930’s, Ogilvy got a break by being hired as an apprentice by a London agency where his brother worked.

He managed to persuade the agency to send him to the US to work and learn from Dr Gallup who was making far more revenue from proprietary techniques he developed to measure people’s exposure, or lack of, to press ads, than from his eponymous political polls. During the World War II, he worked for British Intelligence, based in Washington DC.

He was involved in some kind of hush-hush propaganda work. After the war he bought a farm for his young family in Amish country in Pennsylvania but it proved ill-fated possibly because he spent much of the time reading everything he could about advertising. At the age of 38, Ogilvy found himself an ex-chef, ex-salesman ex-advertising researcher, former intelligence officer and failed farmer with $6,000 in the bank launching a new ad agency.

It was to prove a surprisingly good training, though possibly not to be recommended for all.

The fledgling agency was an immediate success spurred by the famous ‘man (with the eyepatch) in the Hathaway shirt’ press ad which cleared the entire stock of the brand in New York a few days after one ad insertion. It is an ad still worth studying and deciding on how it worked so well. A succession of business gains and well-known campaigns followed and by the 1960’s Ogilvy was rich and famous, garlanded with awards and honoured by board membership of prestigious arts institutions and invitations to the White House.

In 1965, Time magazine ran a cover story with the headline; Is David Ogilvy a Genius? He queried the question mark. The agency went public in 1966, a decision he would later regret when it was subject to a successful hostile take-over by Martin Sorrell’s WPP. He referred to Sorrell, left, as an “odious little shit”, a sobriquet he later changed to “odious little jerk”.

He became reconciled to Sorrell but still saw mega mergers as vehicles for megalomaniacs and questioned their value to people in the agency, clients and even shareholders – so he was dead against them. He later justified the deal by saying he had mismanaged his fortune, was living in a large castle in France and had a new young wife. He kept his trademark sangfroid.

When showing a visitor around the grounds of his castle, they came upon a lake. He was asked impishly if this was where he practised walking on water. “I never practise” came the instant riposte. Considering his long successful ad career and his prolific output of writing on the subject, two questions remain. Has he anything to say to his 21st century successors?

What might David Ogilvy think of marketing communications today? He was nothing if not prescriptive and long before listicles came to dominate journalism he churned them out. In Confessions… you will find 10 qualities he admires in staff, 10 criteria he looked for in clients, 14 characteristics of good clients, 11 commandments for creating top campaigns, 16 rules for great print ads, eight rules for tourism ads, six for proprietary ads and so on. His best known advice was to treat people seriously: “the consumer is not a moron, she’s your wife”.

He also offers this gem; “develop your eccentricities when you are young, in that way people as you get old won’t think you are going gaga”. In Ogilvy on Advertising, he re-iterates and expands his advice, this time accompanied by full colour illustrations of acclaimed ads. Most of the advice is as relevant today as it was back then, particularly for those starting out. 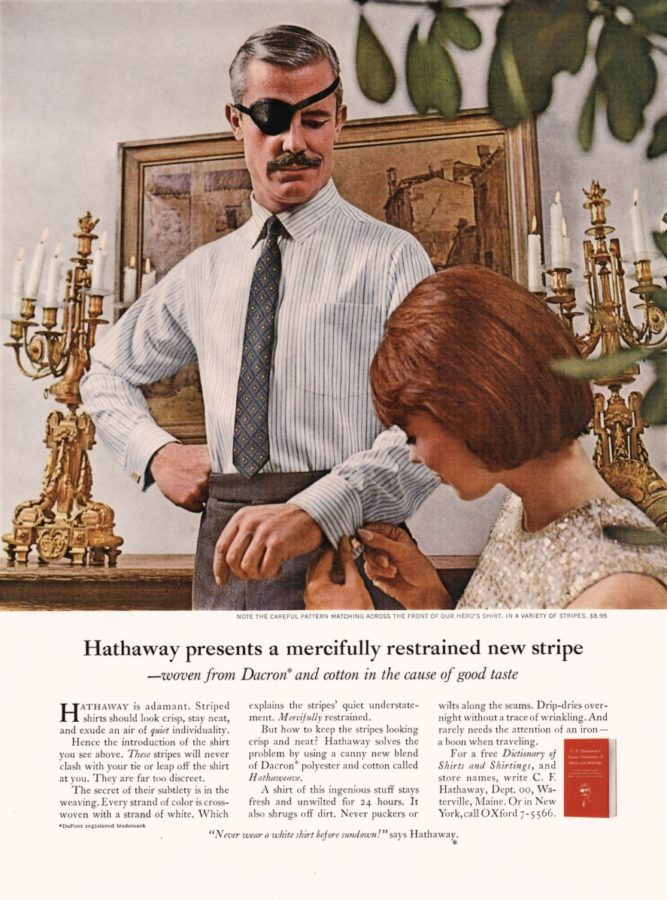 Dressed to thrill: One of Ogilvy’s most celebrated campaigns – the man in the Hathaway shirt. In re-reading the Ogilvy classics, you always learn something new.

It is worth digging beneath the surface and coming up with a list of his main themes – the four P’s. First up, philosophy. Ogilvy benefitted from a classical education, replete with Latin and Greek and apart from the odd references to Horace and Demosthenes, he examined the fundamental concepts and principles of advertising.

His main conclusion is that at its core advertising involves imbuing a product or service with a distinctive personality for commercial success. He believed that many competing products were becoming more alike, as a result of research and technology. Every ad should be thought of as a contribution to the complex brand image. The marketer whose ads build the most sharply defined brand personality will secure the biggest market share and profit.

He provided an interesting definition of what ideally good advertising should provide for a brand; “A first class ticket through life”. He had no time for those who deviate from these principles; “by contrast the manufacturers who find themselves up the creek are those short-sighted opportunists who siphon off their advertising funds for promotions”.

In today’s short-term digital world, the principle is even more relevant. Next up, preparation. It is probably Ogilvy’s most distinctive contribution to current practice. His own preparation was prodigious. He thoroughly immersed himself in any market he worked on. He believed that the ad agency should know as much about a market as the client.

When working on Shell he read every scientific report on the oil industry for three weeks, studied books on chemistry, geology and the distribution of petrol products, read all the trade journals, studied all competitive ads for the previous 10 years, spent Saturday mornings working in petrol stations observing and talking to motorists and visited oil refineries. 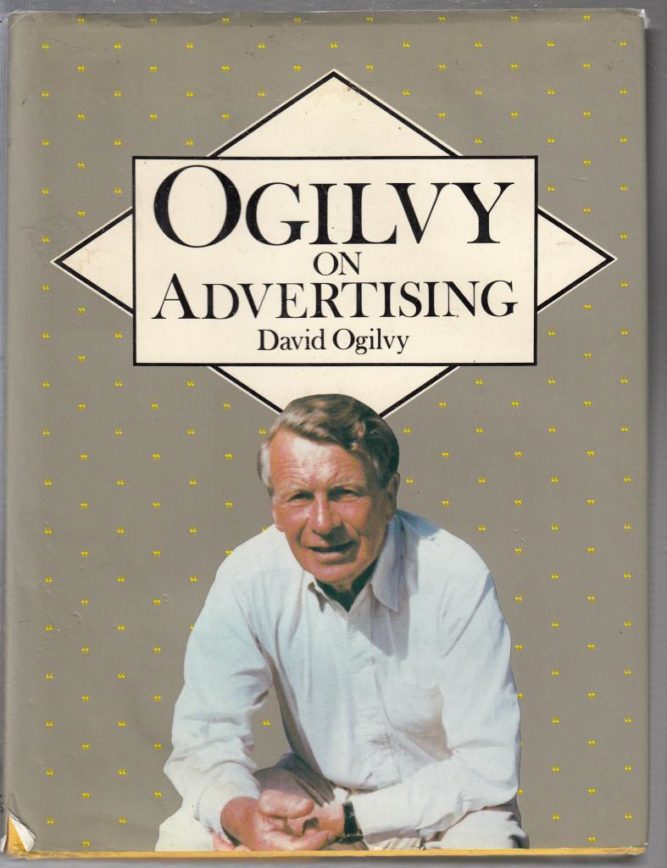 Where would anyone find the time? Ogilvy’s reply: “Just find it!” His advice to young people was to become the best informed person in the agency on the account to which you are assigned. My third ‘p’ is process and relates to Ogilvy’s approach to creativity. Ideas, he claimed, come from the unconscious and the more you stuff your unconscious mind with information the better the end result when you unlock your rational thought process.

He describes the outcome using a characteristically vivid metaphor; “suddenly if the telephone line to your unconscious is open a big idea wells up”. He also provides some tips for opening up the line; it helps to go on a long walk, take a hot bath or drink a half bottle of claret”. My final ‘p’ is poetry. Ogilvy believes that people who think well, write well.

He litters his books with lines from various poets and offers his own brand of inimitable advice; write the way you talk, naturally, use short words, short sentences, short paragraphs, never use jargon – “the hallmark of a pretentious ass”. He argues that great leaders, whether in business or in politics, need to communicate regularly with their staff or their electorates.

He urged care in choosing words. He distained the “self-serving flatulent pomposity” of so many ads and recommended using the vernacular… “Carnation milk is the best in the land/here I sit with a can in my hand/no tits to pull, no hay to pitch/just punch a hole in the son of a bitch”. He was ahead of his time in appreciating a strong corporate culture.

The Unpublished David Ogilvy contains numerous staff memos and addresses that exemplify the distinctive culture which he tried to create. What would he make of marketing today? He would worry about the direction of big brand campaigns, particularly the lack of them. For him, a great campaign is one that would be equally relevant 30 years after its creation.

He never used the word ‘insight’ and he was deeply suspicious of the term ‘creative/creativity’. He believed that everyone involved in the business should be creative, just as they need to be capable of ‘insightful’ ideas. One suspects that Ogilvy may well have regarded the increased atomisation of the business as anathema to best practice.

He would probably categorise too much focus on short term sales gains at the expense of long term brand building. He would be enamoured by today’s focus on advertising effectiveness awards. He lamented the lack of a “corpus of knowledge” in adland. Now we have one. He would also have welcomed the advent of big data and the learnings it can spawn.

John Fanning lectures on branding and marketing communications at UCD Smurfit Graduate School of Business; his email is john.fanning44@gmail.com