Cashen out at PML

The PML report on out of home (OOH) for 2017 showed that the year ended in growth, albeit moderate, with an estimated one per cent increase by the end of cycle 26. Commenting on the result, PML’s group marketing director Colum Harmon said looking at the overall OOH market, what was most encouraging was the extent of original and impactful campaigns.

Cashen started PML 36 years ago with his trusted colleague Gerry O’Donoghue, who later died from cancer. In those days, outdoor ads were called posters or billboards. Now out of home, or OOH, is all the go, with digital making DOOH and print giving way to pixels. Back in 1982, poster contractors thought nothing at all of taking short cuts with the planning rules.

“The big worry for the business now,” Cashen told Marketing.ie in 2016, “is town planners who believe the great outdoors are set to resemble Las Vegas with neons at every turn.” Harmon cited the National Lottery’s Millionaire Raffle, delivering a cross-network DOOH campaign at scale, with a live clock counting down the time of the draw on New Year’s Eve.

Other campaigns which pointed to innovations. PML partnered with Carat and Mondeléz to bring ‘Cadvent’ to OOH with giant advent calendar type doors opened on billboards nationwide in the lead up to Christmas. The joy was spread further with activations in transport hubs such as Heuston Station, just three days before Santa’s arrival. 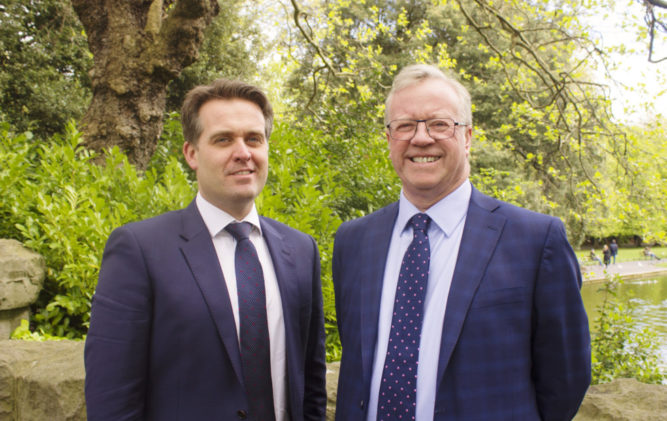 Time to move on: Jimmy Cashen sees out of home as a pure advertising medium which does not pretend to be anything that it is not. PML Group was bought out by Posterscope three years ago for an undisclosed sum. Cashen is pictured with Geoff Lyons, who has taken on the group’s MD role having joined from Independent News & Media (INM) last year.

PML has seen huge changes in outdoor. DOOH is the big step forward, with all campaigns now networked, scheduled and more targeted. Retail accounted for 11 per cent of all OOH display last year, by far the biggest category. All the major supermarkets, department stores and home product brands were there. Gone are the days when pods were only seen in ponds.

So Cashen leaves OOH at a time when the sector is enjoying rude health, despite there being an issue pending which is bound to cause some unease. Economist Jim Power says the long-awaited Public Health (Alcohol) Bill could account for €20 million in lost ad revenue if it goes ahead as proposed and outdoor could be out of pocket by as much as €11m.

In the interview with Marketing.ie two years ago, Cashen said alcohol is about 12 per cent of OOH spend which he described as “still very significant”. Advertisers have been working on an industry-wide programme for the past 13 years, adhering to strict guidelines. Apart from one or two noteworthy breaches, alcohol advertisers have largely complied with the rules.

“The media owners have honoured the code and it’s a surprise there’s a change – but we’ll have to wait and see,” Cashen added at the time. PML’s co-founder leaves the job of taking the company forward in the capable hands of Geoff Lyons, who joined from Independent News & Media (INM). He has a blank canvas with which to work in exciting times.

As for Cashen, he will now have more time for the important things in life – like travel, spending more time with his wife Anne and family and going to every Man United game, home and away. He may not be a big fan of the club’s manager Jose Mourinho but he knows how to play a fair game. The results show in his business success and personal life.