When Legacy commercial director and co-founder Bernard Brogan addressed this year’s Pendulum Summit he talked about his learnings from playing sport to high performance in business and change mentality. He said the teams who make it to the top – and stay there – do so by continually adapting, changing and innovating their game once they reach their goal.

Legacy Consultants started in 2012 as an agency representing Dublin GAA players. Bernard and James Brogan then began to work with brands and the company soon evolved into a sponsorship activation agency. Legacy then moved towards becoming a fully-fledged PR and sponsorship agency with Kevin Moore headhunted from FleishmanHillard in 2016. 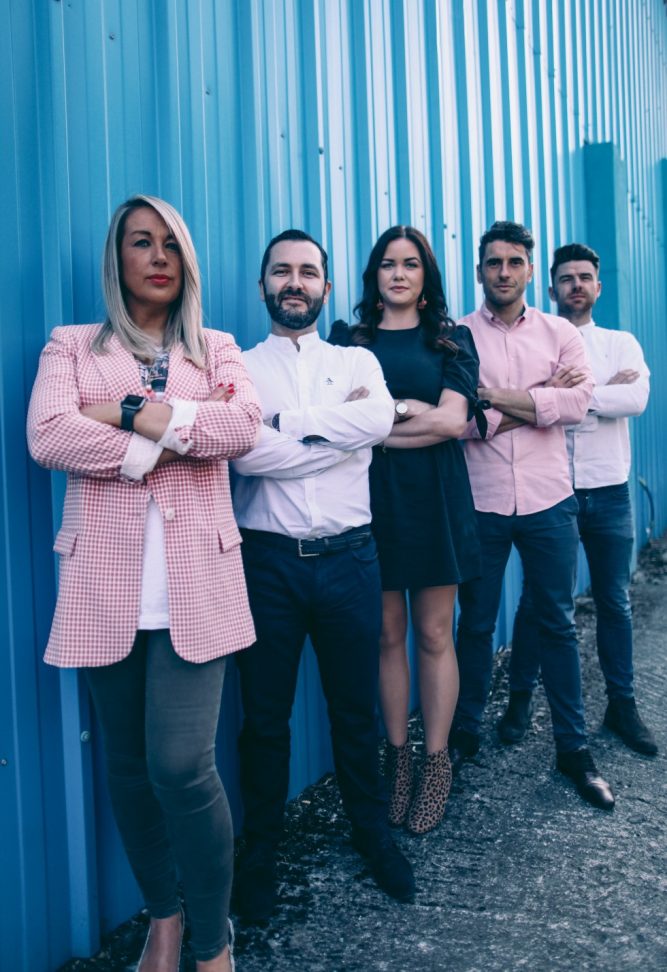 Creating content with vim: Knowing about the need to keep up to speed in PR, Legacy Communications upped their game in tech, data and analytics by establishing the Lab@Legacy audience intelligence. Pictured are Claire O’Grady, head of consumer and lifestyle; Kevin Moore, managing director; Rachel Solon, head of sport and sponsorship; Bernard Brogan, commercial director and James Brogan, co-founder/director.

The agency recently helped Energia launch its rugby campaign, Power Behind Positive Energy, with the help of the brand’s ambassadors and former Ireland internationals Ronan O’Gara and Shane Horgan. As Irish rugby’s energy partner and the title sponsor of the Energia All-Ireland Leagues, the focus is on #PositiveEnergy doing exactly as it says.

The campaign is rooted in the insight that any team can harness the positive energy of fans to promote success. The campaign runs across TV, radio, out of home, social and digital media.

Legacy launched Volkswagen’s Road to Rugby campaign focusing on dedicated Irish rugby fans with a VW TV Tiguan Allspace promotion at the Aviva Stadium for Ireland’s games in the NatWest 6 Nations. Supporters were given a chance to showcase their loyalty by sharing views and stories on rugby. The videos were hosted online at Volkswagen.ie/rugby.

The sponsorship deal extended the brand’s long-term links with the IRFU and Rugby Players Ireland. Malcolm O’Kelly, who was capped 92 times for Ireland, was on hand for the announcement. In 2015, Celtic Pure, the Monaghan spring water company, agreed a five-year deal to become the official water supplier to the Football Association of Ireland (FAI).

The brand later signed up as sponsor of the Monaghan GAA senior football team. Legacy won a consumer pitch for Celtic Pure in 2017. The agency also handles Molson Coors and was the lead for Carling’s 2018 through the line marketing and media campaign for its sponsorship of the Premier League, entitled ‘Play on a Premier League Pitch’.

Carling drinkers in Ireland were offered a chance to play a match at Manchester City’s Etihad Stadium. The agency took care of the in-bar match screenings, live outside broadcasts with Off the Ball and organised the winners’ trip itself which saw 50 football fans experience the Etihad. Former Manchester United and England captain Bryan Robson fronted the launch.

Moore was again hired to handle the five-game Aer Lingus College Football series kicking off when Notre Dame – aka ‘The Fighting Irish’ – take on Navy at the Aviva Stadium next August. He worked for Irish American Events at FH when the teams played at the Aviva in 2012 in front of 48,000 fans – 35,000 of whom had flown in for the game from the US.

It resulted in an estimated €100 million boost for the national economy. Croke Park (2014) and the Aviva (2016) later hosted college games with attendances of around 40,000. The University of Notre Dame has strong historical links to Ireland and has established one of the largest and most widespread fan bases in college football. Navy is a team made up of players enrolled in the US Naval Academy and with one of the nation’s oldest college football programmes. The annual fixture between the two teams was first played in 1927.

Forward-thinking entrepreneur: Legacy co-founder Bernard Brogan fronts for SuperValu and MSL Motors’ Skoda in a personal capacity. The Dublin GAA footballer co-founded the Peptalk corporate wellness and fitness instructors. While he and some family members were involved in a number of hotels in Meath and Tipperary, he now focuses his interest on two bars – Brogans in Kilkenny and Lilly’s in Portlaoise – along with publican Alan Clancy.

The Brogans worked closely with Pat Gilroy, the then Dublin GAA football coach. Gilroy assumed the job in 2009. Two years on, the Dubs won the All-Ireland Football Championship for the first time in 16 years. Gilroy had urged the Dublin county board to hire a full-time commercial manager. When he was told there were no funds, he took on the job himself.

In 2010, Vodafone replaced Arnotts as Dublin shirt sponsor, at first on an initial €800,000 a year contract over three years. Gilroy launched Project Blue, a commercial vision for Dublin. He hired a full-time fundraiser and wooed some secondary sponsors. He planned a new website to sell merchandise and even a mascot, Bud the Dub, but neither materialised.

Gilroy was obliged to shelve the website as Vodafone had paid to rebuild the official site and were unhappy with the idea of a competing site. So how did the agency’s name Legacy come about? As Bernard Brogan explains, they were inspired by the mighty All Blacks. James Kerr’s book, Legacy, centred on the world’s top rugby side and the 15 values they hold true.

It was about leaving the jersey in a better place. Translating sport to business centres around a culture of high performance on the field while at the same time showing integrity and respect for others – basically being strongly motivated to succeed while also acting as a decent human being. The Brogans sought similar values to be their Legacy in business.

Dave Clancy, a tax consultant, provided Legacy with professional advice as the business got into gear operating from Clancy & Associates’ offices in Lucan. Bernard Brogan is a trained accountant and his cousin, James, a solicitor. His legal qualifications came in handy, not least in negotiating contracts for the Dublin GAA squad when Gilroy was in charge.

Both of the Brogans’ dads played for Dublin in the Seventies. Seeing how Leinster Rugby was developed as a brand, the Brogans aimed to do likewise for Dublin, working from the GAA’s strength as a community-centred, 32-county organisation. Despite advances made by the Gaelic Players Association (GPA), the amateur and grassroots ethos prevails.

In January this year, the word ‘Consultants’ was dropped from the company’s title and the business became known as Legacy Communications, complete with a new identity and an office refurbishment. Five new hires were recruited for the sport and sponsorship and consumer and lifestyle divisions, led by Rachel Solon and Claire O’Grady respectively.

The new hires brought the agency’s total number of staff to 18. Tracy Watchorn was made permanent after completing a three-month freelance contract. Watchorn had worked for 10 years overseas, including a stint in the Middle East where she handled the Dubai Rugby Sevens. She also worked on projects for UFC, the Fifa Club World Cup, AEG and Disney.

Bernard Brogan helped Jim Gavin’s Dublin football chase five titles in a row. He is the first to accept that he is now a 15/20-minute man, willing to come off the bench and help the Dubs score and win matches. He battled back after a full tear of his anterior cruciate ligament (ACL) while training in February last year, side-lining rumours that he was about to retire.

Sports sponsorship is not without risks. Valued at €140m annually, a few major deals ended recently. Diageo pulled out of its long-running support for London Irish RFC after the club’s signing of Paddy Jackson caused disquiet. FBD and Barry’s Tea cut their ties with Kilkenny Greyhound Stadium and the annual dogs’ meeting at Cork’s Curraheen Park respectively. 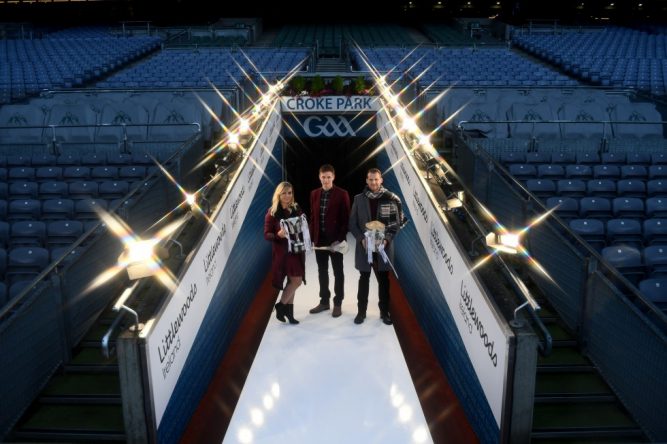 Legacy has not encountered any such challenges. It signed up Littlewoods Ireland as a top tier partner of the GAA and the Camogie Association (above). The online fashion, electrical and homewares retailer agreed a deal which saw them replace Liberty Insurance and join Centra and Etihad as headline sponsors of the GAA Hurling All-Ireland Senior Championship.

The retailer is the Camogie National League’s title sponsor. Littlewoods is known for its fashionwear, including its V by Very women’s clothing and accessories. Legacy was awarded its first global contract in 2017 for Fuzion 100 coconut water and managing it in 11 markets, which included a sponsorship with the England international rugby squad.

The tag line on Legacy’s revamped website is ‘Brand stories with impact’. The goal is to tell client messages in a stand-out way with a lasting impact on consumers. Having the right agency culture is crucial marked by a feel-good vibe and a give-and-take approach. Staff are allowed unlimited annual leave. There are plans for a team holiday in Marbella in October.

As regards hiring new talent, Legacy is on the lookout for people with specific business skills beyond communications, rather than what would usually be seen as essential attributes for a career in PR. With plans in mind to start a corporate division, they have a content partnership with Google. They also invest in Pulsar for insights and data on trends and social media.

The 24/7 sponsorship game knows no end.

View all posts by Michael Cullen →
Love Island – is it really what it is?
Fiona Field: Houston, we have a problem