Love Island – is it really what it is?

Few TV shows have split opinion like ITV’s smash hit reality show Love Island. It makes for entertaining work conversations with debate around the virtues, or otherwise, of the show and its characters. The chat has sparked heated debates among friends, in hair salons and taxis and other total strangers. Surely, this is what all good TV entertainment should be about?

For those of us old enough to remember – Love Island reminds us of what appointment TV was once like. Those moments when we huddled together to catch the latest gangland drama in Love/Hate. We look back on those water cooler moments with some nostalgia. Today, we are served a choice of endless content across dozens of terrestrial and streaming platforms.

Each vies for viewer attention. So other than live sporting moments, like the Rugby World Cup – which are themselves being rapidly disintermediated – Love Island represents an anomaly in modern broadcast services, as it shows how traditional media like television can be combined with newer formats to create unique interactive selling experiences for brands. 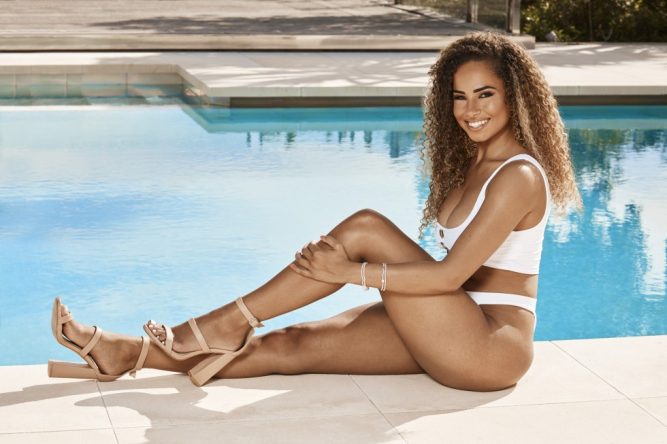 Sun, sex and a lust for fame: Amber Gill (pictured) and Limerick man Greg O’Shea were this summer’s winners of Love Island which saw record viewing figures for ITV and Virgin Media Television. Such is the success of the reality show that next year ITV plans to host a second Love Island series in a new winter location – a villa in South Africa.

At MCCP’s annual Trendstream event, we spoke about Love Island within the context of positive passive selling – a phrase we coined to describe a world of everywhere commerce where almost everything can be bought instantly. Brands can be transformative when they combine a compelling narrative, with the best delivered in a frictionless user experience.

In 2018, the latter manifested itself in the partnership between Love Island and the Misguided fashion brand which allowed viewers to shop any item of clothing from the show using the Misguided app. The brand recorded a 40 per cent sales increase during the promotion. This year’s fashion sponsor was I Saw It First, which saw a monthly sales jump of 67 per cent.

It recorded a 60 per cent increase in website traffic, with predictable spikes on Monday nights after 9pm when the show aired on ITV2. Monterosa, the company which developed the Love Island mobile app, reported that from July 2018 – at the end of the fourth series – the app had more than 3.5 million users and had generated sales in excess of £5 million in revenue.

So aside from all the uncontrolled hormones and buckets of sun cream, Love Island is a heavyweight player in the UK and Irish media space, becoming a stand-alone brand independent of its ITV lineage. In fact, the contribution to ITV online revenue from the show helped limit the slide in its total ad revenue to five per cent in the first half of the year.

It is not just brands that are reaping big rewards from the show. Many contestants enter the villa with a well-conceived strategy. Those with aspirations of forging a post-villa career are only too aware that it is not just about what happens inside the house; the real payoff comes when the cameras stop recording and the contestants must swop reality TV for reality.

Since appearing on Love Island last year, one half of the now split winning couple, Dani Dyer, has scooped a six-figure hair campaign with Mark Hill, a £750,000 collaboration with fashion brand In The Style, published an autobiography, appeared in Nativity: The Musical for £25,000 and has reportedly charged upwards of £15,000 per sponsored Instagram post. It does not include other brand deals she achieved while still in a relationship with co-winner, Jack Fincham. It is estimated that she is now worth a cool £1.7 million.

But it has not all been sun and joy for the Love Island brand. The show has courted its fair share of controversy after two former contestants died by suicide. In May, ITV cancelled the Jeremy Kyle Show after the death of a participant who had reportedly failed a lie detector test. ITV’s chief executive Carolyn McCall denied any association between the two incidents.

So, what does this mean for brands?

It shows us that in an increasingly fragmented media space there is always new ways to reach your customer with fresh combinations of traditional and new media. Agencies MCCP get hired to uncover ways to connect and communicate brand messages clearly and effectively,   whether internally thorough culture or externally through service innovation.

Michael Browne is senior brand and innovation strategist at MCCP