Dublin’s newest ad agency is Acne. If you guessed that the four letters stand for Associated Computer Nerd Enterprises, you were spot on. Launched in Sweden’s capital Stockholm above a joke shop in 1996, the agency was bought by Big Four player Deloitte in 2017, winning over its four founders with a lucrative deal in much the same way as Accenture interacted with Rothco’s bosses.

Doing all kinds of everything from the start, Acne rolled out a computer game, a TV series, a toy maker, musical instruments and a video camera. Acne Studios became a fashion brand in its own right ad is now valued at close to half a billion dollars, whose designs are stocked in Brown Thomas. The idea began when Acne sent out jeans to clients as Christmas gifts. 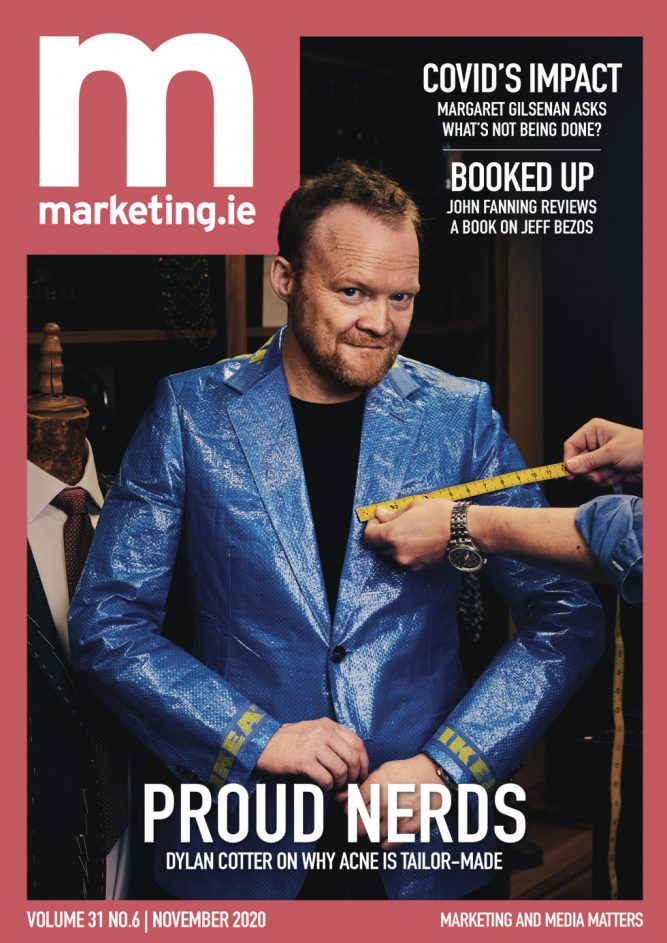 Bags of ideas: For Instagram, Acne created a content factory turning out thousands of pieces of fun work, showing people how to use new features on the platform. For Ikea, they created global TV ads, an interactive version of their catalogue and one of the most successful pieces of reactive social content for a brand. Cotter is wearing a jacket made from Ikea bags created by Henry and Charlie at Paul Henry Tailoring on Great Strand Street in Dublin.

As well as handling some world famous names, the agency created ads and designs for up and coming Swedish brands. Acne grew with those brands along with names like Ikea, Volvo, Netflix, Spotify and H&M. Acne Productions represents Swedish directors, photographers, designers, illustrators and animators. So what ‘newness’ can Acne bring to Ireland’s agency scene for clients?

Cotter says Deloitte operates Acne’s seven European offices as a single team, making it more agile. “There’s a lot of talk about how various teams work on different projects,” Cotter says, “but the reality is that the way traditional agencies are managed predetermines the solution for clients. During the summer, I chatted to some senior marketers about how they want a proper digital-first agency.”

“It’s the sweet spot between what the market needs and what we can do,” he adds. “Clients want the big, bold ideas of a conventional ad agency, but they’re tired of the TV-centric roll-out. The centre of gravity has shifted from the screen in the corner of your living room to the screen in your hand. But traditional agencies are slow to shift their centre of gravity in response, for all kinds of reasons.”

With regards to Covid-19’s impact on adland, Cotter believes that in the short-term it is the luck of the draw. An agency lucky enough to be handling a supermarket chain, a mobile phone brand or a bank, will be happy. In the long-term, the focus for many brand owners is to get their digital in order by moving on from just making a TV ad and pushing it online and across social platforms.

He believes debates about TV versus digital, creativity vs automation and ad agency vs consultancy are reductive and black and white. Old agencies defend the old, new operators evangelise about the new; when the way forward is more ‘and’ than ‘or’. Top agencies in the 2020s will be – to borrow a phrase from elsewhere – non-binary. Sometimes traditional media will be the answer.

However, often they may not be. Sometimes media is not the answer at all. An able agency will easily and quickly flex to deliver the right mix. But flexing is harder than it looks. Often agencies talk about delivering media-neutral big ideas, but what they are really doing is throwing their hands up and saying: “We don’t know the right way to put this idea into people’s lives anymore.” 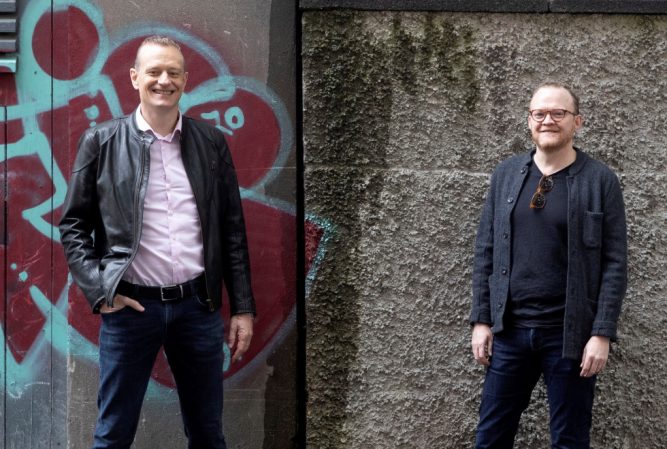 Magic from brand insights: In addition to Dublin, Deloitte also recently introduced Milan, Rome and Lisbon to Acne, to accompany its offices in Stockholm, London and Berlin. Cotter says Swedish creatives dig down through the business challenge until they find the real human problem to be solved. Cotter is pictured with Deloitte Ireland’s CEO Harry Goddard.

So they deliver a big idea and they call the TV script a ‘manifesto’, call the radio script ‘digital audio’ and throw in an AR filter as a Hail Mary. When it comes to the actual roll-out, the muscle memory and the traditional machine kick into action and out comes an old-style and trusted campaign. Cotter insists that that is the key bit – the machine determines the shape of the product.

So if the solution warrants a TV ad, there is a team that has won every gong going. If the client would like them to produce it too, they are steered in the direction of Acne Productions. If the answer is an in-house content factory, UX, CRM, or if it is a new way of shaping a physical store experience, Acne has expertise in imagining and delivering and running all of that and the rest.

The thing is, most agencies have a machine built to very efficiently churn out traditional TV-centric campaigns. That word agility comes back into play again. Cotter says agility is what makes Acne special. The Swedish word is ‘vig’- and they think vig. They have a small core team, with a bench of 300,000 experts across the Deloitte network in everything to call on, whenever they need them.

As Acne’s executive creative director, Cotter knows the local creative landscape as well as anyone. He spent over 11 years at Irish International, now BBDO Dublin, as a copywriter and later as ECD. He had stints at Havas and Arks. A Corkman, he attended Douglas Community School, where he “studied humanities and inhumanities”, and graduated from UCC with a BA in philosophy and economics.

A winner at all the major international creative awards from his time at BBDO, including D&AD, One Show, Sharks, Webby and Epica, Cotter says that clients believe more in the value of gongs than ever before. He puts it down to the ambition of Irish brands and a recognition that winning salutes from one’s peers in adland is a good measure that the work is up to international standard.

But there is a caveat, Cotter says awards shows tend to favour purpose-driven campaigns, placing work for charities and good causes on a pedestal at the cost of established brands. At the end of the day, great ideas rarely happen by chance, rather they emanate from dogged curiosity. Creatives must ask lots of questions and interrogate the brand – more perspiration than eureka moments.

As well as his feats in adland, Cotter has explored filmmaking, writing and directing shorts of up to 10 minutes in length on everything from affairs of the heart to unexpected tales about dentists for the Irish Film Board’s Short Shorts scheme, offering producers grants of around €10,000. He is currently working on feature scripts, one with funding, and another which is still in the very early stages.

Cotter believes the standard of Irish ads has improved hugely. While mediocrity will always be a safe bet, the “good stuff” is better than ever. He singles out Rothco’s JFK work for News Ireland for particular praise. Speaking of Rothco, has he heard anything back on what the Accenture-owned agency thinks of Acne coming to Dublin?

Nothing that they expressed publicly, he insists.