John Fanning on why a book on Jeff Bezos allows us to understand why we should resist buying anything, least of all books, from Amazon

Bezonomics tells the story of the biggest and most valuable company in the world today, Amazon, a business that is just over 25 years old. Founder and CEO Jeff Bezos is now the wealthiest man on the planet worth almost $205 billion. Yet in typical American fashion he came from a poor background; his mother was 17 when she gave birth and his father left home when he was a year old, never to return.

He took his surname from his stepfather but it was from his maternal grandfather that he inherited his drive and resourcefulness. He graduated top of the class at school, achieved high   grades at Princeton in electrical engineering and computer science and joined a New York hedge fund, where he also excelled. When he saw that the internet was growing at 2,300 per cent a year, he knew he must take a new path.

Bezos decided he wanted to be part of the new digital world so he moved to Seattle to set up an online book shop. It was a tech company from day one, based on the principle of the flywheel; once you get it started you don’t stop; “you keep pushing till you build momentum, then it starts to compound itself and you keep compounding the momentum”. It formed the basis of the Amazon philosophy from the start. 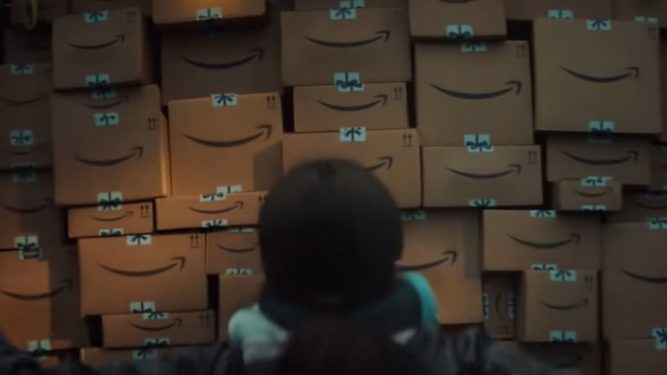 Poor regard for workers’ welfare: After a visit to an Amazon warehouse author Brian Dumaine compares it to a low security prison; workers often have to walk 15 hours a day, they are penalised for being ill and there is no lunch hour; only a half-hour. The conditions have prompted politicians of all persuasions to question the implications of such a powerful, unaccountable force. Bezos makes about $320m a day, no doubt because he’s worth it.

The same maxim persists as there is no day two, which Bezos defines as stasis, leading inevitably to irrelevance, excruciating decline and death. The three principles underlying the company are customer obsession, continuous innovation and long-term thinking. Having achieved world domination in the book market, among others, the relentless logic of the flywheel means that Amazon now applies the same principles to the grocery retail trade, with its acquisition of Whole Foods.

It now casts its ruthless eyes on healthcare, shipping, banking and advertising. Like the other titans of tech, Bezos’s ambition does not stop at his core business. He owns a 30,000 ranch in Texas where his rocket project, Blue Origin, is based. He wants to make earth a residential and light industrial zone and move all mining and heavy industry into space where he envisages a greatly expanded population.

He says: “If you had a trillion people you could have a thousand Einsteins, a thousand Mozarts and da Vincis; how cool is that?” I suspect there is a flaw in this logic but I’m too exhausted to figure it out. He has also invested $42 million to build a gigantic 10,000-year clock to encourage everyone to think long term. Ultimately no business is safe from Bezos’s remorseless acquisitiveness.

It is why the chapter suggesting defensive strategies for existing businesses makes for essential reading. Author and business writer Brian Dumaine outlines four approaches to survive the Amazonian onslaught; create an amazing in-store experience, offer a highly curated selection of exclusive products, increased investment in tech and social media or have a social mission that sustains loyalty.

Nike is an obvious example of a heightened in-store experience but New York bedding company Casper offering sleep pods for a 45-minute nap is another. Crate & Barrel, an up-market furniture company where 95 per cent of the products are unique, should be safe from Amazon’s clutches.

Stitch Fix is a tech-based clothing company where customers fill out a detailed questionnaire outlining their measurements, preferred styles and colours and receive a curated box of clothes on a regular basis from which they can make their selections. They are so invested in tech they employ over 100 computer scientists to ensure that the algorithms are constantly making more accurate selections.

Finally, Warby-Parker is a business where social philanthropy has been built in from the start which should protect them from a company not noted for its social conscience. Dumaine is too canny not to be impressed by Amazon’s extraordinary ambition and achievements but he is also alert to the dire consequences for their staff and ultimately for all humanity, if the flywheel continues its relentless trajectory.

The new business model does not come without social and ethical challenges; social isolation will increase as the home is filled with gadgets and virtual personal assistants leaving us with a diminished sense of community. The author accepts that ultimately governments will have to intervene as they did before to tame a previous breed of ‘robber barons’. In the meantime, do read this fascinating book.