Finding out where wisdom prevails

Breandan O Broin on whether wisdom stems from creativity. The best place to start is with wise thoughts on creativity

Wisdom, you may be surprised to learn, comes courtesy of a seeker of truth named Andrew Zuckerman who has curated the thoughts of the great and the good into a large coffee-table size volume and accompanying DVD called Wisdom. Zuckerman is a wise, multi-award-winning photographer and filmmaker who hails from Washington District of Columbia (DC).

It’s fair to add that most creative directors are also ‘multi-award winning’ but not all of them are wise, trust me. So of what does wisdom speak? Is it something that comes with years? If so, it could mean just doing the same stupid things over and over. No, that’s insanity. Or, praise be, could it be something much more vibrant? Could wisdom stem from creativity?

Well, could it? So that is where we will begin, with some wise thoughts on creativity.

Jazz musician David Amram reminds would-be followers of the fashionable that “today’s trend ends up in tomorrow’s landfill”, which is a bit of a downer for many an advertising concept. Everyone has a song and a story; indeed every brand has one too.

Amram contends that our role in telling brand stories is “to put your feeling into what’s already there, work with purity of intent and an exquisite choice of notes or words”. Never even stop to worry about being a conformist, but don’t bust a gut striving to be a non-conformist either. Dizzy Gillespie said his trumpet was lying in its case for him every day, waiting to be played.  It’s the same with a blank page; play it old, play it new, play it.

Famed South African author Nadine Gordimer also comes clean on the truth about writing, whether it’s a Booker prize-winning novel or a radio ad for Dundrum Shopping Centre.  “Writing is a discovery,” Gordimer tells us. The writer or copywriter learns to read what people are and to write what people speak. The problem is the more you know in life, the more difficult it becomes as your standards grow ever more demanding.

On becoming a ‘senior writer’ (something that in adland can happen as early as 27), a sort of wisdom begins to settle in. As a young woman, Gordimer expected wisdom would arrive with age and that it would be blissful just sitting there being creatively wise. Far from it, she says, “I couldn’t have been more wrong. I’ve found out that old age is a second adolescence”.

Be proud of the years in your pen. 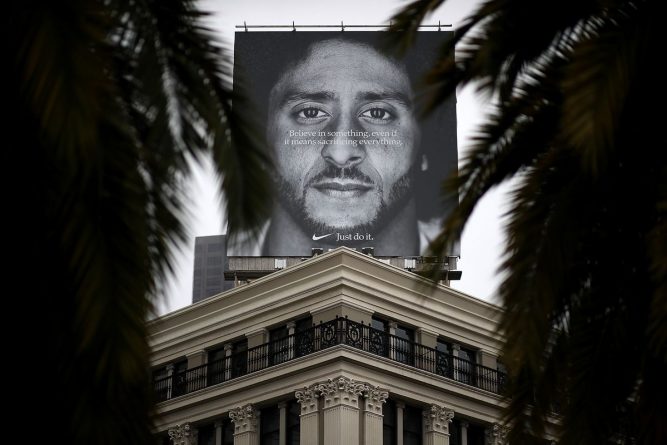 The Greek Goddess of Victory, aka Nike, appears to have nodded, like Homer. That’s what journalist Tanya Gold claims in any event. Writing in the Irish Independent, Gold takes major issue with the over-sized female mannequins that adorn the flagship London store of the athleisure brand in order to “celebrate the diversity and inclusivity of sport”.

Nike’s mannequin is obese and Gold says the brand utilises imagery that relies on human feelings of unease to sell clothes, bags, perfumes and cosmetics. More than that, it’s also dangerous. Obesity is not pretty. Obesity damages your now life and shortens your future life.  Obesity is like cigarettes, it kills. Where, oh where, is the middle ground, Gold asks.

She wonders why Nike chooses not to show the ordinary medium female body shape which is where true health and happiness lies? Effectively she accuses Nike of cynicism and carelessness. As always, Gold wears her heart on her journalistic sleeve, she may well have right on her side but she is missing a vital point, one that goes right to the brand’s essence.

Nike never ever promotes ordinary. Nike promotes magic. Nike may or may not be wise.

CREATIVE WISDOM DOWN UNDER

It seems an age ago now when delegates to the Kinsale Sharks Festival would join in a raucous chorus of ‘I feel like a Toohey’s’ on awards night in Acton’s Hotel. Back then, the advertising Aussies were happy to display their wares in Cork’s finest resort, sink pints of Guinness, catch fish and pick up some prizes. But that was then, what about now?

Truth is, I don’t have a clue.

The eco-farmhouse in Western Australia where I was holed up for a month recently have a TV set. Oh, it had vines all right and pesticide-free veggies, cockatoos, a kookaburra and a giant-size worm tank. (The tank was giant-size, not the inhabitants; relax). One joyfully discovered more about the diet of worms than the latest shenanigans about Rockall.

After what seemed like the endless Battle of Brexit and hospital cost overruns, it was a relief not to see a pixelated picture of another mindless mass killing. So the jewels of Aussie adland remain a mystery. Ignorance is sometimes a blessing. Knowing when it’s ok not to know is a form of wisdom. Tell your client you haven’t a clue about his mystery product benefits.

Make him work for his money by forcing him to convince you. Then it’s over to you. You can now no longer claim your creative solution is not that good because you didn’t have the full story. You no longer have a hiding place. Your work will be all the better because of it. 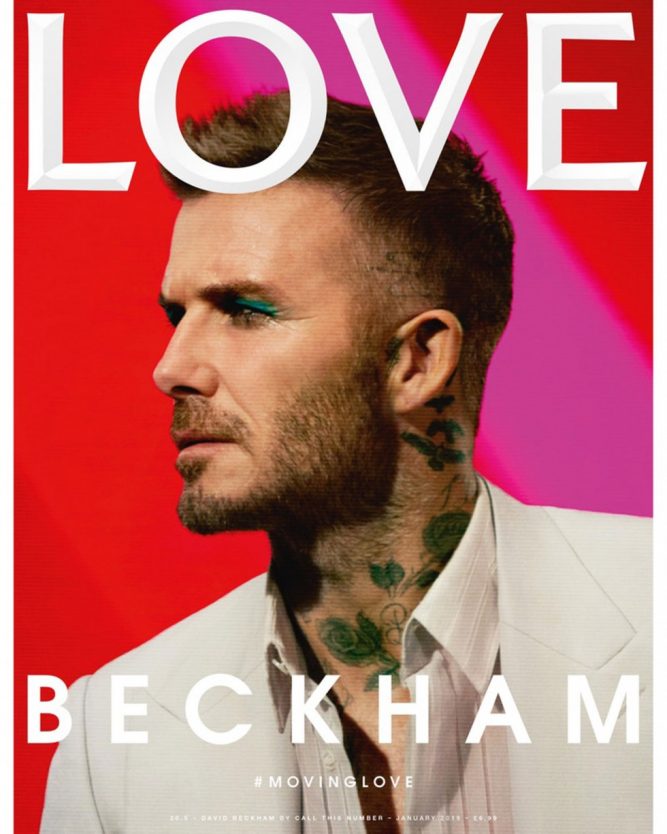 Make-up for men: The next big global beauty trend is make-up for men. Jo Horgan, founder of the Australian cosmetic retail giant Mecca, says the question is not when the trend is set to take off, but just how big it will be. Horgan admits that not all men will embrace what should be a “massive”  trend. Her comments come just months after ex-footballer David Beckham was pictured on the cover of Love magazine sporting teal eye shadow.

Australian press ads is mostly shots of hot sausages, cold beer and big low supermarket prices. It’s like you’re reading the Sindo Down Under. Farmer Jack’s Supermarket in Rockingham offers spotted Pilbarra cod for only $11. Perth Radiological Clinic has a picture of a happy 2+2 family sheltering under a roof as they advertise ‘Everything under one Roof’. A denture expert shows a pic of a man sporting a ‘tache that covers his entire mouth telling us not to “cover your smile any longer”. There are career opportunities for punsters in Perth.

Out of home advertising is not every Aussie’s cup of green tea. There was a Federal general election on and woke folk are giving out about the place being plastered with posters, mostly of middle-age men with shiny suits and grins. Best by far was a 48 sheet for the main Labor opposition party featuring a shifty-looking Liberal prime minister Bill Shorten.

A headline shouted ‘This is the Bill that shouldn’t be paid’. Not quite as good as the infamous Saatchi & Saatchi ‘Labour Isn’t Working’ gem of yore, but then few if any are. On the streets of the port town of Fremantle, the Destination Marketing Working Group is running a major public awareness campaign that confirms to passers-by that ‘This is Fremantle’.

“We bloody know that”, say the local Freos, “now stop wasting our bloody money”. The DMWG chairperson explains how the words succinctly communicate the Fremantle brand story of “an image-driven destination, flexible in application and reflective of the brand values as part of a characterful four-year destination marketing strategy”.

“Bonzer!”, as they say in these WA parts.

Everywhere I went, people asked, not what part of the world was I from but what part of Ireland I was from? They just assumed; either that or it was the freckles. Ireland is everywhere in WA. A bloke at the southern tip of the universe said to me: “You’re not from Cork, I can tell. My name is Bruce Murphy; the wife’s people come from Kinsale.”

I sang him a few bars of ‘I feel like a Toohey’s’ and it fair made his day. 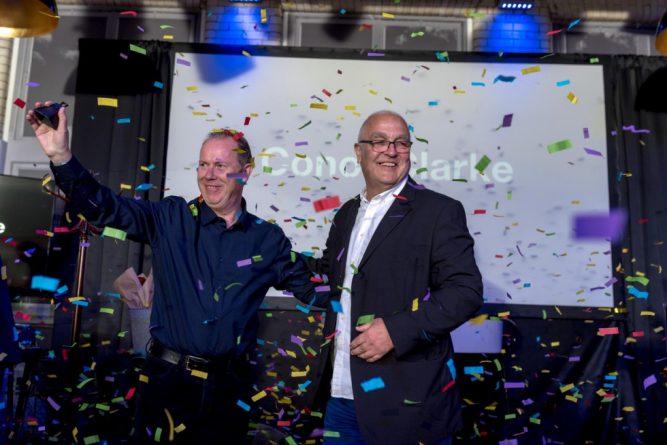 The Institute of Advertising & Design made a wise choice in their selection of Conor Clarke (above left) as recipient of the Catherine Donnelly Memorial Award for services to creativity in advertising. Clarke was one of the founders of Design Factory, a man happily shared his design awareness with students at NCAD and who now runs the highly-regarded Design West School in Connemara. When Conor gives, it’s as good as it gets. Comhgairdeachais.

URGENTLY IN NEED OF WISDOM

HOW TO FIND WISDOM

An Post has devised an intriguing way to help you boost your store of self-awareness.  As they issue a commemorative stamp honouring the centenary of Dublin-born writer and philosopher Iris Murdoch, they invite wisdom-seekers to pop them a postcard containing their burning questions about life, love and everything.

100 thoughtful questions will be sent to 100 philosophers around the globe and if yours is among them you receive a personal reply on a specially-designed postcard complete with the Murdoch stamp. It’s a beautiful intriguing interactive idea, custom-built for the brand. Not for the first time does David McRedmond and his team get the ST creative thumbs-up.

Find your inner truths at philosophybypostcard.com.

The heart is what matters, most of all  – Kris Kristofferson

Risk it, go for it. Life always gives you another go – Mary Quant

A new idea is obsolete in seconds – Frank Gehry

There, I’ve just said it and already your shiny new idea is yesterday’s news.

But look on the bright side. At least you’re wise to the fact.