Fiona Field on why marketers should avoid taking the easy road by following others. Be smarter and build a stronger brand

Just recently, I found myself waiting, somewhat impatiently, in line in one such queue. It got me thinking of the parallels of marketing and how in times of recession, how much comfort is derived by rowing in the same direction. A media survey by Ebiquity Marsh indicated that many advertisers expect to cut their budgets by 22 per cent between now and the end of 2020.

Why is it always a 20-something figure? Is it because it sounds right? Or, perhaps it is because it is an even number. Quite possibly, there may be no science at all behind it? What is typical in recessionary times is a speedy retreat to a perceived safe and familiar option. Psychologists call it the herd mentality. It is based on human traits of mirroring each other and seeking out what is comfortable. 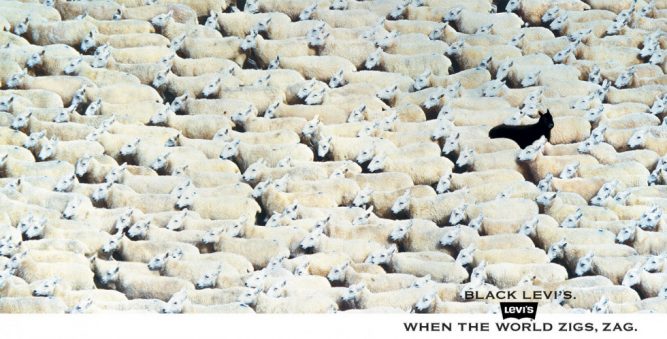 Black sheep count for flock’s sake: BBH’s John Hegarty created the Black Levi’s poster showing a solitary black sheep among a white flock with the end line: ‘When the world zigs, zag’. The campaign won heaps of ad awards in the Eighties. Fiona Field says following the flock right now might seem like the easiest option but thinking like a start-up is actually what is needed to emerge from the Covid-19 pandemic with a stronger brand.

Collective fear stifles independent thinking and while renowned marketers the world over talk a good game, it is almost like they are subconsciously telling people not to follow. Be brave, they say. I don’t know about you, but when I hear the word brave, it comes just before a fall and evokes memories of a dentist’s chair, or worse. So, what can marketers do to make the right decisions and find new and higher ground, without eroding their profits and hard-earned work that preceded this pandemic?

Gather the data and seek out less obvious opportunities. If there was an empty queue in the supermarket would you join, or would you prefer to stay in the long queue? Recently my mother, who is in her 70s, was in the market for an iPad. TGI says 370,000 people over the age of 60 own a tablet, representing 19 per cent of all tablet ownership and yet this audience is largely ignored in advertising terms.

Often when budgets are cut, it is assumed that we can target our way to safety. While segmentation can play a valuable role in identifying growth opportunities, widening instead of narrowing your target audience may drive better outcomes. Recruiting light users, or people who consume your product less, is generally accepted as a better way to grow your base, as opposed to recruiting loyal users. 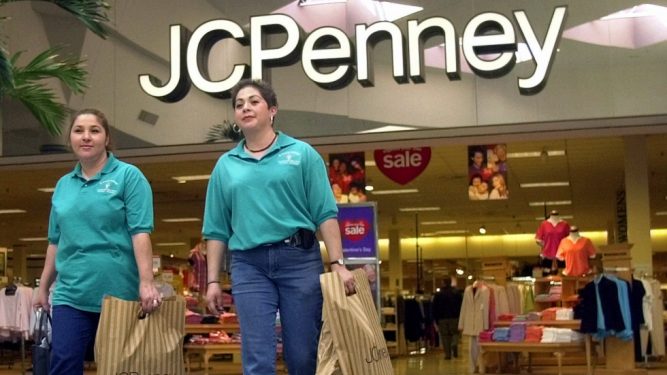 Hippo is the acronym for the highest paid person’s opinion. One of the most famous examples of this was JC Penney who recruited Apple’s former VP of retail operations Ron Johnson for the princely annual package of $52 million, to breathe life into the giant retail dinosaur. Johnson, rather than listen to his employees and the data presented to him, trusted his gut and previous successes.

By the time Johnson left the company, he had burned through nearly a billion dollars in less than 17 months. JC Penney recently announced it is closing its doors for good. The same is true of brands, where many companies adopt a follow-the-market-leader strategy while instead they should study the data, listen to employees and customers and make more informed and ultimately better decisions.

Media buyers analyse value by measuring what is known as a CPT, or what we call the cost of reaching a thousand people, relative to your target audience. The lower the CPT, the better. Often, when budgets are under pressure, invariably only the most cost-efficient media make the final cut in a media plan. While based on sound media planning principles, the strategy omits a critically important fact.

If the medium, or indeed the media owner, is more cost competitive than another, then the chances are that more of your rivals will also be advertising with the same media owner.  Analysing how many direct competitors are fishing in the same pond provides valuable insight to drive efficiency and effectiveness.

Some media are much more measurable in terms of effectiveness. It is not to say traditional media does not work as effectively; it’s just that their performance is not as easily measured. Since Covid, traditional media has made big gains. With supply up and demand down, there is a chance to drive efficiency.

Thinking like a start-up is what is needed to emerge from the crisis. Remember what the word brave means. As the ever-helpful Oxford Dictionary assures us, it is  to “endure or face unpleasant conditions or behaviour, without showing fear”. So, let us not be brave; instead, let’s be smart and leave the sheep up the mountain where they belong.