Kumar’s new book a must read

It is now an obvious truism to say that the digital revolution of the last 20 years has completely overturned many if not all of the principles, practices and precepts of the marketing world, a world that has changed utterly. The scale and pace of the revolution has been so great that no one has been able to summarise, conceptualise and categorise it adequately: until now.

Prashant Kumar’s Made in Future: A Story of Marketing, Media & Content for Our Times, opens with a clear premise; the rising centrality of tech and data has changed how people relate to brands which makes many aspects of 20th century marketing theory obsolete. His goal here is to bridge the gap between the tech evangelists and the traditional naysayers – and he scores spectacularly.

Kumar, who is Indian, is living proof of the current cliché that India’s leading export is global economy CEOs but he comes from a fairly conventional marketing communications background. He began work in Leo Burnett in Mumbai in 1999, in the dying days of the pre-digital order. 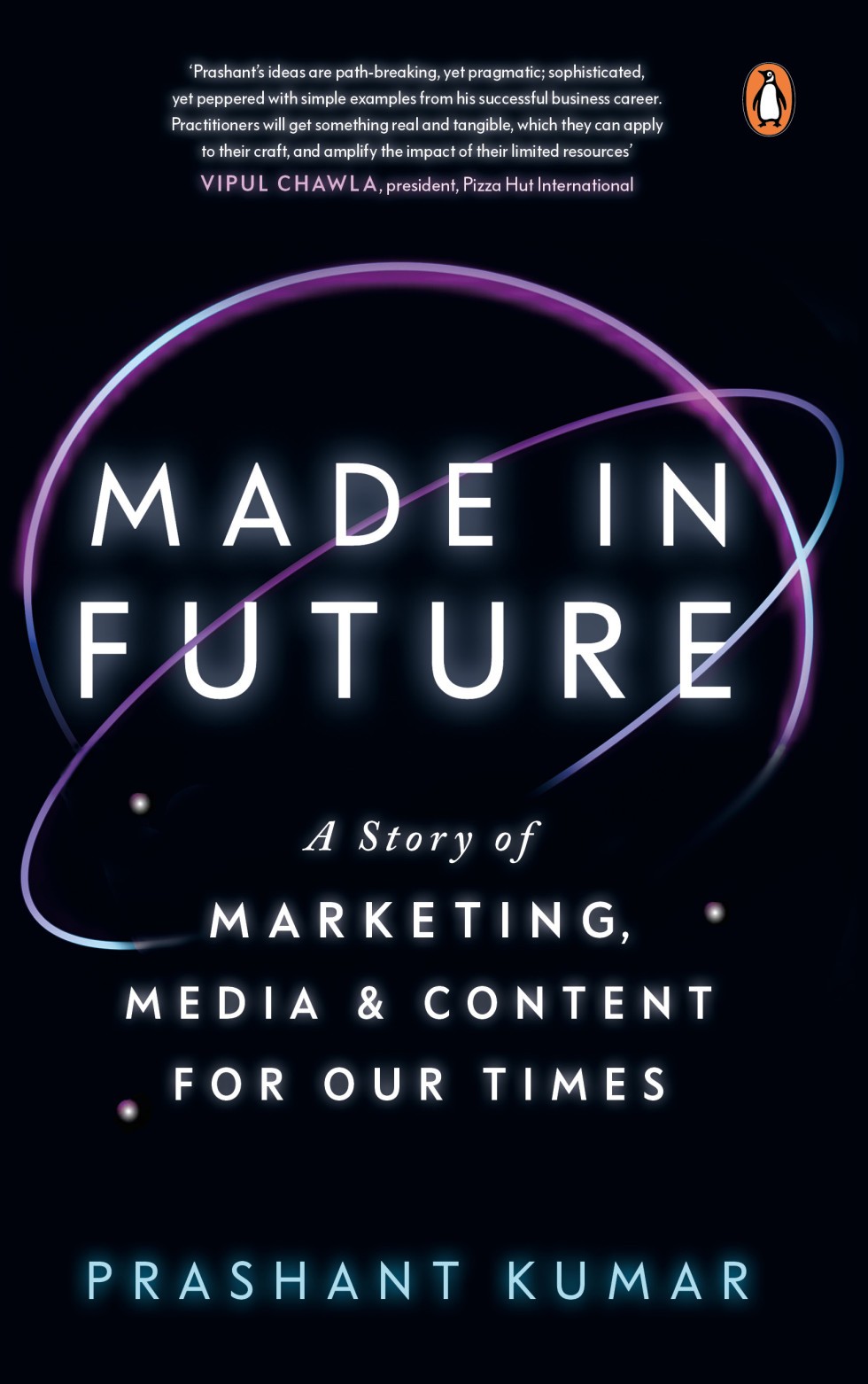 He moved to McCann’s in Malaysia, then to Singapore and then, when turning 40 in 2015, he set up a new digitally-based consultancy and communications business, Entropia, which he labels a ‘consulgency’; the only bum note in a beautifully written book. The new venture was an immediate success and has now (inevitably?) been bought out by Accenture Interactive, owner of Droga5.

Any reading of this highly comprehensive book for a short review like this can only be personal and selective, so I will concentrate on three themes which struck me as critical to anyone currently working in marketing. The first, and to some extent the book’s core, is a series of a dozen or more diagrams explaining how branding and marketing communications work today.

They include how the marketplace has evolved from a physical space to a virtual space; to the four powers controlling the new landscape; network, UX, data, brand to an imaginative diagram of a new consumer journey DIET; discovery, influence, experience, transaction, which unlike the old AIDA (awareness, interest, desire and action) model is not linear but overlapping.

‘Kumar’s Made in Future is the most significant book since Byron Sharp’s How Brands Grow, and in its depth and sweep it is even more essential reading’ – John Fanning

There are chapters and diagrams on the role of social media, new brand experience and the new creativity. But the baby isn’t completely submerged in the digital bathwater and Kumar still believes there’s a role for segmentation and brand identity. He includes a classic brand diagram and creatively fills in the details for the Tesla brand. The diagrams are a tremendous aid to brand planning.

The second theme is the effect of the digital revolution in general and the social media platforms in particular on creativity and on wider society. Kumar is wary of Silicon Valley, believing that it wants to turn marketing into a set of algorithms and that the complexity of the new age could kill the soul of the business; “loss of serendipity is the big casualty in the age of answers”.

In a wider context, he bemoans the declining influence of professional media (I prefer ‘professional’ to ‘traditional’) and its corrosive effect on democracy’s descent into “shrill demagoguery”. He believes that social media algorithms lead us into an “obsessive data tunnel in which only our own echoes can be heard”, encouraging our reactive at the expense of our reflective selves.

The third theme is the current topic de jour of brand purpose and activism. Unlike some recent sour comments on ESG from the financial sector, Kumar does not believe it’s a hypocritical fad and introduces the Japanese concept of Ikigai, ‘reason to exist’, to outline his own take on the subject. With the use of diagrams, he first fills in a detailed framework for Coca-Cola’s Ikigai.

In general, it is an optimistic reason to exist, a belief in the glass being half full, and follows with a more detailed outline of an expanded vision as a “catalyst for a can-do society”. He concludes the discussion by confronting the thorny issue of our collective responsibility for encouraging increased consumption in a world greatly endangered by excessive accumulation of more ‘stuff’.

As usual, the author doesn’t shirk the issue and suggests that we need to need to consider alternative forms of fulfilment; intellectual, altruistic, creative and spiritual, pointing out that many ancient cultures viewed “humankind as a seamless extension of nature as one organic whole”. More controversially, he suggests that our GNP metrics for measuring may need a new perspective.

John Fanning lectures on branding and marketing communications at the UCD Smurfit Graduate Business School; his new book is entitled The Mandarin, the Musician and the Mage and is published by the Peter Lang Group; john.fanning44@gmail.com

View all posts by Michael Cullen →
Does your brand live up to its promise?
National Lottery’s Dervan top marketer