Masters of all they survey

Research and insights are largely one and the same, so say B&A’s Ian McShane and Luke Reaper and they explain why to Michael Cullen

Is market research endangered? Not that the systematic practice of gathering and interpreting information to get closer to people is likely to go the way of the dodo any time soon but the term is being increasingly sidelined for the more catchy ‘insight’. Clients and agencies no longer have ‘researchers’, they have ‘insight custodians’ or some similar hipster job title.

Seated among the elegant couches of the InterContinental Hotel in Ballsbridge on a bright but chilly winter afternoon, B&A executive chairman Ian McShane and managing director Luke Reaper know their way around the research labyrinth. “Without wishing to appear glib,” McShane says, warming to the subject, “we’ve always been focused on insights.

“With people being so busy, they don’t have time to go through reams of reports. We ask them ‘what would success look like for you?’. We observe people and pluck learning from the data – perhaps there’s just the one insight.” Reaper says researchers must be curious. Understanding the broader cultural context for people and brands has never been truer. 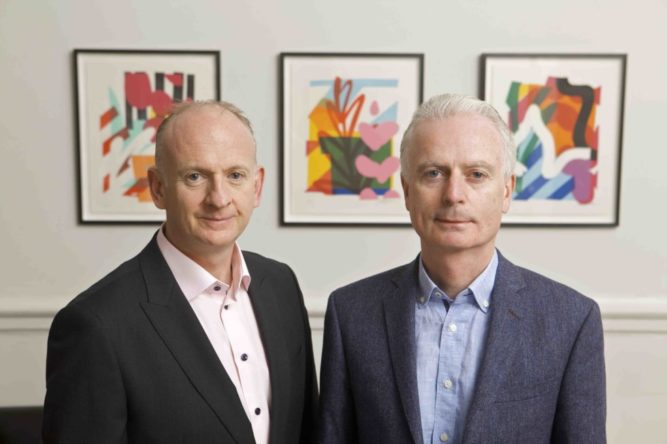 Culturally curious: B&A’s Luke Reaper and Ian McShane say the agency’s cornerstone was a curiosity about people in a cultural context. Today, such chemistry has become critical and influences  methodologies used. Where focus groups may not be the right fit, ethnography might do the job in researching people in their natural environment and state of mind.

The recession caused a lot of disruption in marketing services and coupled with tech changes research altered radically. The Association of Irish Market Research Organisations (AIMRO) reported that research took a near 30 per cent revenue hit from 2008 to 2011. Some agencies merged, others went out of business. Everyone in the industry had to tighten their belts.

The darker days taught them that there was a benefit in giving clients a choice of new tools and using digital sensibly. Qualitative is still core to the B&A brand, but Reaper points to the likes of shopper pathway videos, hangouts, ethnographic customer journeys and connect sessions, all of which supplement tried and trusted focus groups and in-depth interviews.

“We’re putting ourselves into people’s lives to understand them in their everyday surrounds,” Reaper says. “Recently we conducted student groups with broadband and laptops hooked up to a TV set – but with no subscriptions to paid TV. They streamed using proxy servers and then we sat down to talk. We’re also seeing more interest in qual from big data bodies.”

Everyone is obsessed with big data these days. Companies may be good at gathering data, but as soon as they have it collected they are like the dog that caught up with the car, they do not know what to do with it. Reaper says information overload has been around for some time. Offering research buyers more information than they can swim in should be avoided.

Researchers are more honed in on forensic analysis of issues, which is then used as illumination. But it is not to be confused with ‘new techniques’, which can shed more darkness than light. The new GDPR data laws come into play from the end of May. Reaper says B&A has been ISO data compliant for many years with audits on major contracts.

In a time when people do not answer their doors, live in gated communities, have dumped their landline and only answer calls from numbers they recognise on their mobiles, how are consumer surveys done these days? The research companies must be asking more and more of fewer people, who want to be paid for their input. Yes and no, says McShane.

“It’s a fact more people are living in gated communities and apartments,” he admits. “But with the work we do for clients like Nielsen we can get access to them, through perseverance our people learn the tricks of the trade to get beyond the concierge. Our researchers have ID and while it can be a headache at times and an expensive exercise, it pays off in the end.”

The conversation comes back to research trends and sifting through all the chatter. Reaper says B&A recognised a trend towards health studies in the most general sense. They now conduct Ireland’s Longitudinal Study on Ageing, aka TILDA, collecting data on all aspects of health, economic and social circumstances from people aged 50 and over nationwide.

They also handle the National Patient Experience Programme for the Health Information & Quality Authority (HIQA) and the Pfizer Health Index. Such studies are echoed among brand owners as they strive to get a deeper understanding of consumer attitudes to healthy lifestyle. 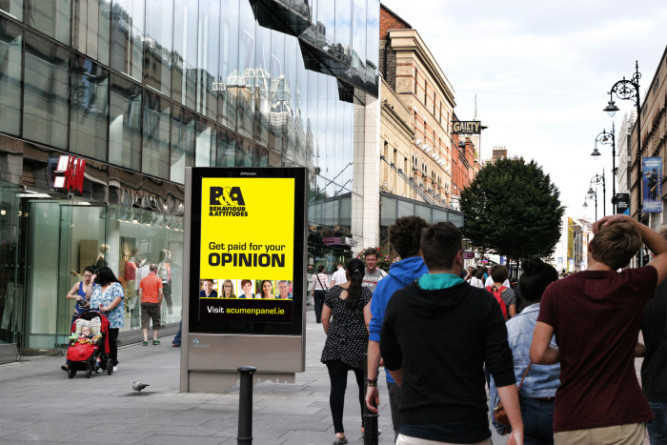 Acumen Online is a consumer panel, providing feedback for advertisers, agencies and media. Surveys range from monthly reports on websites to social opinion polls and idea testing. The results are demographically controlled in line with the wider population, yearly nationwide Establishment Survey and combined with Government population stats. Respondents receive share points for their time which can be redeemed for vouchers and charity donations.

The demand to get respondents to perform many tasks before and after a focus group seems to be par for the course now. Is there a risk that people are becoming reluctant to engage with market research due to the demands placed on them? Reapers says respondents must be treated with respect and rewarded fairly. Prepare properly and give them enough time.

“It comes down to quality control,” he insists. “We give them a booklet and a video diary. We take photos which are uploaded to an app. It’s about being creative and they like that.” Are face-to-face focus groups a thing of the past given the quality of the online platforms available? McShane says you must be agnostic when it comes to research methodologies.

“More and more research we conduct is a hybrid,” he says. “It’s face-to-face work, an online forum and then through moderation we feed in ideas and analyse the findings. It’s horses for courses. The mix available to researchers is much wider given the online tools out there.”

McShane and Reaper both worked for TNS. They believe that independence is a force for good. It means B&A avoids possible conflicts and can trawl for ideas from nearby economic consultants to customer experience experts in New Zealand. The agency was founded 33 years ago by IMS defectors Des Byrne, Phelim O’Leary and the late Graham Wilkinson.

As business transitions go, the subsequent succession plan was pretty seamless. Along with McShane and Reaper, directors Elaine Sloan, Neil Douglas and Larry Ryan joined the board. Directors and shareholders David and Martha Fanning left the company for personal reasons. B&A launched a monthly online omnibus and hired new planning and qualitative talent.

Dr Maggie Matthews joined B&A last summer as head of research. She worked for over eight years in the UK, most recently with global agency Flamingo, and was a senior planner with Jump!, the Dublin agency run by former Guinness marketing manager Paul Kelders. Matthews specialises in branding, innovation and creative strategy development.

New System1 thinking in terms of brand tracking has been rolled out, along with emotional facial reading for ad testing. With the B&A Incubator, they try out ideas they have come across elsewhere to see if they work. It might be Passive App tracking in the way we use a mobile or it could be the things we do and do not remember about our everyday habits.

McShane says that the days of clients arriving thinking “we need to do some research” are over. Generally, issues and problems will have been well thought through before a client comes through the market research agency door. But that does not mean the client’s disposition is didactic: most of them do not buy research like they would bags of flour.

“Part of the appeal of market research specialists is the way in which they may nuance issues in early discussions and recommend to clients exploration that will significantly deliver the desired illumination,” Reaper says. “We would still suggest cultural analysis as a fundamental ingredient in understanding brands, markets and their future,” he adds.

Which leads to the question about the balance between tactical and strategic research. The B&A view on this is that if the strategic map and landscape is not thought out clearly and appreciated by all, then the tactical stuff is dust in a storm. It is not to knock tactical studies on activations and rebrands on the head as this remains bread and butter for marketers.

However, setting aside research on strategy on the basis that it is too big, expensive or conceptual can prove costly. After the financial crash a decade ago there came a period where   research on strategy seemed like an indulgent hobby. Companies and public services which saw the turbulence as a time to forge new strategies are now reaping the benefits.

As well as insight, ‘human capital’ is a term bandied about a lot of late, what with Accenture upping the creative ante and targeting new consumers by buying Rothco. B&A has hired a diversity of talent, with experience in psychology, film, literature, sociology and commerce. They even have a stand-up, which may be an appropriate punchline on which to end.