Either way, it means most people are in pretty good form for the week as they drink their €12 pints of Heineken or sip their €10 cappuccinos on the terrace of the Carlton Hotel, overlooking la plage. Add some blue skies and speakers like Ralph Fiennes, Jared Leto and Rob Lowe and it starts to feel a bit like that other famous Cannes festival. But that’s where the similarities end and as the week wore on I began to understand why Sheryl Sandberg, Maurice Levy and Martin Sorrell make it their business to go to Cannes.

This year, Publicis creative director Ronan Nulty and I visited the festival for the first time. With delegate badges starting at €2,000 and going up to €4,000 (seven days) we needed decent excuses. For Ronan, that came in the form of him winning our agency’s first Cannes Lion for Murphy’s Stout last year. I reckoned I deserved it for enduring the slings and arrows of the industry for over 25 years. For both of us it exceeded our expectations and gave us an insight into why Cannes goes from strength to strength. 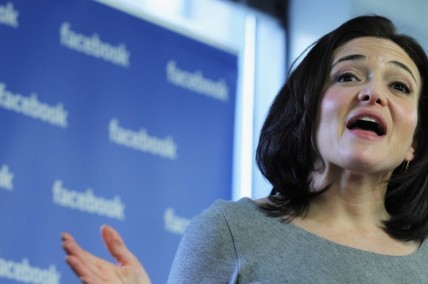 EVENTFUL GATHERING Facebook’s Sheryl Sandberg, WPP’s Martin Sorrell and BBH’s John Hegarty attend Cannes. When Emap International bought the Cannes Lions festival in 2004 for £52.5 million, it reported the show had made over £7m in profit the previous year.

The Cannes Lions are big business. Emap paid €52.5 million for the festival in 2004. It has grown exponentially since then and is now worth a lot more. If you take an average delegate fee of €3,000, multiply it by 12,000 delegates, add award entry fees and top off with big sponsorship plays, you’ve probably got at least a €150m business. With that budget, you might expect to see a few celebratory speakers accompanied by lavish opening and closing parties. In both cases, the festival didn’t disappoint.

Before attending I was familiar with the Lion awards ceremonies and had heard about the parties but I had no idea that there were so many talks and seminars. Those talks ran from 9am to 5pm for six days and every hour you had a choice of five. A range of top class speakers meant you could find something that appealed to your own particular discipline.

Creative? Go see the talk about the new Dr Dre Beats campaign or the interview with John Hegarty and David Droga. MD? Listen to Richard Edelman speak about MDs getting out from behind the desk or enjoy the absorbing Japanese presentation on the agency model of the future. As with many seminars, the quality of speakers varied but you would have to be unlucky not to get at least four stimulating talks each day. It was also great to see two Irish speakers at the event in the guise of Kay McCarthy of MCCP and a music entrepreneur by the name of Bono. Both flew the flag with aplomb.

If you needed a break from the talks you could always stroll down to the Creative Sandbox, Google’s very own section of the beach, complete with loungers, product demos, a free bar and an opportunity to try out Google Glass. Where once the ad agency networks had the biggest presence in Cannes, now the tech companies dwarf them.

In the South of France money talks and right now Google, Facebook and Spotify have the dosh. I would conservatively put Google’s marketing budget for the week at a million. They are courting the creative community, enticing them to embrace their respective platforms to develop award-winning creative campaigns across the board.

At the end of each day, most delegates attending the festival visit the rooftop reception area for a drink and a ‘network’. On four of the evenings there was a choice of slickly produced award ceremonies that ran for two hours from 7pm. What you did after 9pm each night depended on your age and tolerance for alcohol.

Keith Weed, chief marketing officer, Unilever, said marketing has changed more in the past five years than it did in the 25 years prior and, crucially, it’s accelerating. If you wish to get a perspective on the changes and how they might affect your company’s business, or indeed, your own career, then a visit to Cannes is well worth the effort.

It does help if you have enough experience to dismiss those speakers who are acting out of self-interest. John Hegarty labels this cohort as the Digital Taliban and separates them from those describing what the future of marketing services could look like. But whether it is client or agency side, Cannes is a highly stimulating week spent among 12,000 people who do little to disguise the fact they love both advertising and expenses.

Padraig Burns is managing director of the Publicis Group in Ireland