Understandings on what drives consumers

Since Daniel Kahneman won the Nobel Prize for Economics in 2002, behavioural economics has enjoyed a certain vogue in marketing communications. It enjoys a cult following among those who say it can unlock insights of significance and even some government departments used its findings to ‘nudge’ people into action on issues like energy conservation.

Kahneman said that we are not always rational calculators of our own economic self-interest but it could be argued that it was one of the main findings of the studies of how marketing communications worked from the researchers assembled in JWT London’s ‘University of Advertising’ in the 1960’s which became known as one of the homes of planning.

Kahneman’s contribution was his separation of the way we approach decisions into ‘reflective and controlled’ which he labelled System 2 thinking and the System 1 variety involving more unconscious, subconscious and illogically intuitive thinking. Needless to say, most of the markets that marketers are engaged in are subject to the latter type of thinking where people take a variety of unconscious short-cuts in marking purchasing decisions.

Richard Shotton’s recent book The Choice Factory is arguably the most practical guide to behavioural economics, with an overview of how findings from behavioural science can be applied to marketing communications. Shotton argues that the short-cuts we make in System 1 thinking are prone to bias so we must be aware of them and use them to our advantage.

He has compiled a list of 25 biases, not a comprehensive amount but the ones most relevant to our business. Interesting to note that in the introduction he quotes Bryon Sharp, saying that marketers too often rely on untested assumptions; marketing managers operate a bit like medieval doctors, working on anecdotal experience, impressions and mythical explanations. 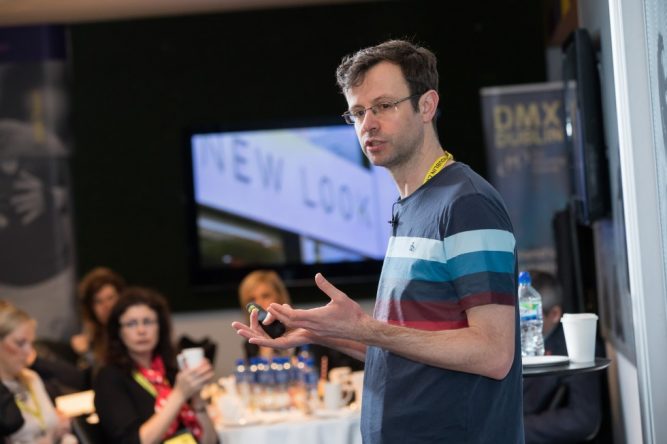 Ritson’s a fan: Choice Factory author Richard Shotton has a melodious and balanced voice amid a cacophony of overstatement, marketing lecturer Mark Ritson said. Readers can learn how marketing influences consumers using 25 cognitive biases. Or, for the more prosaic, how to get people to re-use towels or buy wine when German Oompah music is playing.

It has some relevance to a similar debate which has been rumbling around our neck of the woods in recent days but about which yours truly could not possibly comment. There are a few common themes among the biases, particularly the question of context. Shotton believes we overestimate the importance of personality and underestimate the importance of context in explaining human behaviour. It is especially true in terms of media selection.

Also, note context. A message like ‘ex-governess seeks occasional evening work’ will evoke quite a different response in the window of a corner shop in Clanbrassil Street – going largely unremarked – compared to a personal  notices ad on the back page of The Irish Times. He quotes a number of examples where behavioural science can aid pricing strategy.

Consumers will pay more for a scone presented on a china plate than on a paper plate and comparing the price of a BMW to a Bentley will appear better value than comparing it to a Ford Mondeo. True enough, but one would suspect that any half-way decent salesman would have figured that out long ago. Insight work does not have to be pricey or complex.

A more interesting bias arises from what the author refers to as ‘the fetishisation of data’. Former Manchester United manager Sir Alex Ferguson reckons his biggest mistake was selling his central defender Jaap Stam too soon. He based the decision on continuous data suggesting that the Netherlands central defender was making fewer tackles each season.

His career later blossomed in Italy but the data failed to take into account that the lower number of tackles was a sign of Stam’s improvement; he was losing the ball less and intercepting more passes so he did not have to make as many tackles. Another bias given an interesting twist is that we should not underestimate the possibility that mentioning a flaw in our brand can evoke sympathy, highlight a compensating advantage or arouse curiosity.

Examples under this heading are the long-running Avis ‘We Try Harder’ campaign, the UK campaign for cream, ‘naughty but nice’ the famous Roy Brooks property ads from London in the 1960’s, ‘Brothel in Pimlico’ and the most intriguing of all, novelist Iain Bank’s decision to include bad as well as good reviews on the sleeve of his debut novel, The Wasp Factory.

Here’s a sample of the London Times review: “As a piece of writing The Wasp Factory soars to the level of mediocrity, maybe the crassly written explicit language, the obscenity of the plot were though to strike an agreeably avant-garde note.” Shotton is fortunate in having his book endorsed with testimonials from Rory Sutherland, Dave Trott and Mark Ritson.

There are enough thought-provoking ideas in Shotton’s book to make it an informative and enjoyable read. Whatever problems you may be grappling with in your job these days, it might be worth taking time out to examine about the science of behavioural economics.