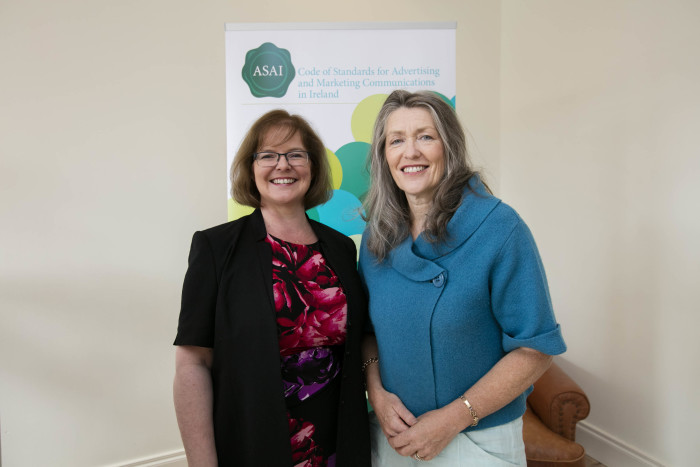 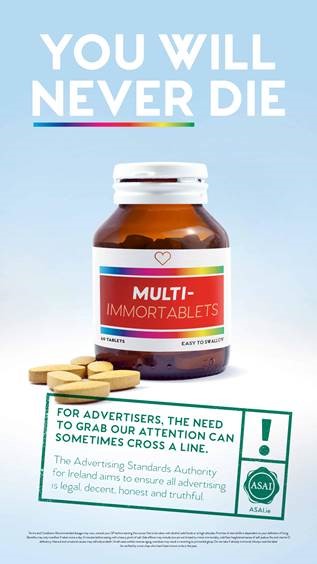 The Advertising Standards Authority for Ireland (ASAI), the independent self-regulatory body responsible for promoting the highest standards of marketing communications in Ireland, has launched a new ad campaign across radio, print and digital outdoor.

In a statement, a spokesperson for the ASAI told Marketing.ie the authority has worked with a number of agencies over the years in supporting the self-regulatory body. “In this instance, however, the agency doesn’t feel it needs to be publically acknowledged for its contribution,” the spokesperson added.

The campaign aims to remind consumers and advertisers that the ASAI is committed to ensuring all marketing communications in Ireland are legal, decent, honest and truthful. The print ad parodies a sample product, with ‘Multi-Immortablets’ and a caption which reads ‘You will never die’.

It is a tongue-in-cheek sample of an ad which is an obvious breach of the ASAI code. It is also clear from the ad that the ASAI is the body tasked with ensuring people’s best interests.

Similarly, a 30-second radio ad features a radio VO who tells listeners that he is “known for his safe and reassuring tones”. The spot says the ASAI oversees standards, ensures ads do not mislead or offend consumers.

The code’s objective is to ensure all commercial marketing communications are ‘legal, decent, honest and truthful’. ASAI members are required to abide by the code and not to publish an ad or run a promotion in contravention of the rules. The authority offers free, confidential and non-binding copy advice on the compliance of proposed ads.

The ASAI’s 2015 annual report shows that a total of 1,221 written complaints relating to 924 ads were submitted last year. The updated seventh edition of the code came into effect in March. It was updated to ensure it reflected societal and cultural values and attitudes. Since 2007, the ASAI has examined over 27,000 ads, with a compliance rate of 98 per cent.