Cadbury buses it for GAA campaign 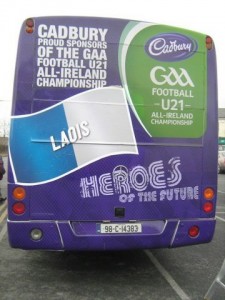 Cadbury are running a series of bus wraps created by Master Media in eight locations around the country to promote their sponsorship of the GAA Under-21 football championship different. All eight buses normally operate on set routes with timetables but are redeployed on match days as private hire for fans.

David Dwyer of Master Media said the eight locations are Dublin, Derry, Down, Galway, Tipperary, Mayo, Cork and Westmeath. On match days, each of the buses carry a flag for the relevant county. The campaign was co-ordinated for Cadbury by PML with media planning and buying by Carat.