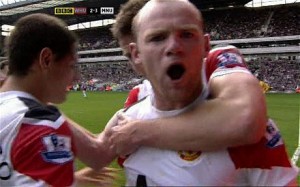 Coca-Cola has ended its sponsorship deal with Wayne Rooney by “mutual agreement” and will not renew the Manchester United and England striker’s annual contract worth over £500,000. Coca-Cola said it was “proud” of the work done with Rooney over the years, including campaigns for Coke Zero and Powerade energy drink.

Speculation surrounding Rooney’s Coca-Cola contract began last September after media reports he had allegedly used a prostitute after his marriage to his childhood sweetheart, Coleen McLoughlin. Rooney is paid about £5 million a year by Man Utd. A deal signed with publisher Harper Collins earned Rooney a £5m advance for a five-book contract over 12 years. The deal is said to be the UK’s biggest ever sports publishing deal.

Today, Rooney lost his FA appeal on a charge of bringing the game into disrepute after he swore at a Sky Sports camera in a goal celebration against West Ham at the weekend. It means Rooney will miss Man Utd’s home Premiership game against Fulham this Saturday and the club’s FA semi-final against Manchester City. Rooney scored the only goal in last night’s Champions League first leg quarter-final away to Chelsea.