Coke plug in The Road leads to divide 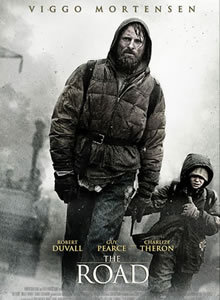 The manner in which the Coca-Cola scene from Cormac McCarthy’s post-apocalyptic novel The Road is portrayed in John Hillcoat’s new movie of the same name has caused a rift between ‘purists’, who claim the plug is overly-commercial and not in keeping with the story’s integrity and others who see it as a valuable free ad for the soft drink, or, as some might phrase it, much fizz about nothing.

Normally, Coca-Cola avoids any association, either paid-for or without a fee, with a movie which is R-rated. But it’s said that the movie’s lead actor, Viggo Mortensen, used his powers of rhetoric to convince Coke executives of the wisdom of keeping the brand’s placement in line with the McCarthy novel.

In the movie, The Man (Mortensen) hands a can of Coke to his son, Boy (Kodi Smit-McPhee), as a treat. Born after the world was reduced to a barren wasteland starved of food, vegetation and fauna, Boy faces a fight for survival as he and his dad make their way south, to the last stand, the coast (echoes of the movie Lamb with Liam Neeson, based on Bernard McLaverty’s novel).

Apart from Coke, other brands which feature in The Road as survivors of a dead civilisation, are Vitamin Water, Spam and Del Monte canned foods.

Anyone who has read Cormac McCarthy’s Pulitzer-winning novel, The Road, know it as a grim and harrowing tale of survival. In book form, McCarthy’s telling of  the story of a father and son’s horrific odyssey to escape a new world where hope seems impossible, is etched into memories.

The movie version is an honest and heroic attempt to translate the text into a nightmarish experience for cinemagoers. Mortensen (Lord of the Rings and Witness) gives a powerful portrayal of a father whose love for his son knows no bounds – someone who both walks the walk and talks the talk to save them from physical, mental and moral ruin.

His son’s character  (Smit-McPhee) is aptly understated. Despite the relentless drab vista that accompanies us on a journey under grey skies, amid volcanic ash, dead forests, crumbled infrastructure, suicide victims and marauding cannibals and rapists, the gloomy imagery and dialogue is fitting.

The score by Nick Cave and Warren Ellis and Javier Aguirresarobe’s cinematography adds to the despair. Robert Duvall has a brief but purposeful cameo. Post-hurricane New Orleans, along with parts of Pennsylvania and Oregon, provide the landscape. But it’s unlikely their State tourism bodies will be reminding us of that in their marketing.

Beautiful Charlize Theron, as the inconsolable mother seen in flashback, is the one gratuitous ingredient in a film starved of Hollywood pap. The recession and the current cold weather may be doing little to lift spirits,  so if it’s escapism you seek, The Road is to be avoided.

Otherwise, wander down to your local cinema and buy a ticket. You’ll be the richer for having experienced this morbid, disturbing but stunning film. May “the fire within” be with you.

The Road is showing at cinemas nationwide