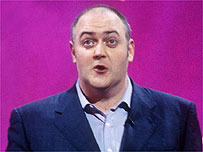 Comedian and broadcaster Dara O’Briain, widely known for hosting Mock the Week on BBC 2, is the special guest at the Marketing Society Christmas lunch in the Shelbourne hotel on Friday, December 11th. The society’s chairperson, Valda Boardman, said tickets for the event, priced €150 each, were selling fast but as of today there were still some available for purchase.

The son of a trade union official, O’Briain went to UCD where he studied theoretical physics and became a member of the college’s Literary & Historical Society, which allowed him to hone his public speaking skills.

His TV career  started in RTE as a presenter on a children’s show before going on to captain a team on the satirical TV show, Don’t Feed the Gondolas.  He wrote a newspaper column and moved to London.

He helped set up a production company called Happy Endings, which produces The Panel for RTE.  For a few years, he presented the show before his TV commitments in the UK took precedence.

He teamed up with Griff Rhys and Rory McGrath for the travelogue, Three Men in a Boat. He will soon be back in a boat when a new series gets underway in the new year as the trio travel down the Shannon.

O’Briain’s  new book,  Tickling the English, is a fun look at the British people and traces his stand-up tour in these islands, while sharing views on race, culture and identity – from football to beer drinking.

He divides the British people into two camps: those who are pragmatic and those who are romantic  – or “the perenially disappointed”.  O’Briain prefers to be well known rather than being branded a celebrity.

Brought up in Bray, Co Wicklow, in a Catholic, nationalist family (his granny was a messenger for the IRA during the Civil War), O’Briain, 37, lives in London and admits to being a Gooner – an Arsenal fan.