Half price fish and chips today 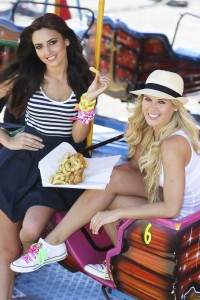 Over 200 of Ireland’s traditional Italian chippers will fry up fish and chips at half price today to mark 127 years of the ‘one ‘n’ one’. Two thirds of Irish consumers surveyed for the chippers say they like nothing better than freshly cut Irish Italian chips, with one in four prepared to travel “as far as it takes” to find the best meal. Two thirds eat them while on the couch watching TV and 83 per cent say salt and vinegar is a must seasoner.

Asked with whom they would most like to share their fish and chips, 41 per cent of women said actor Colin Farrell, while 27 per cent named Leinster rugby star Rob Kearney. Some 18 per cent went for Ireland football manager Giovanni Trapattoni, with 14 per cent choosing Taoiseach Enda Kenny. Actress Amy Huberman came out on top for one third of Irish males, followed by model Georgia Salpa on 29 per cent.

Sisters Grainne and Sile Seoige were chosen by one fifth of respondents and TV host Kathryn Thomas by the remaining 14 per cent. Irish Traditional Italian Chippers Association (ITICA) members nationwide will support the Funky Feet campaign in aid of Cappagh Hospital Trust. Customers are encouraged to ‘chip in’ and buy laces to help raise funds for the hospital. The multi-coloured laces cost €2.