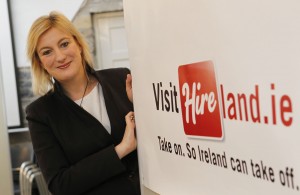 Voluntary jobs initiative Hireland claims to have produced 4,500 jobs and 7,000 in pledges from employers since its launch two years ago, co-founder Lucy Masterson says. The former McConnells executive says that with the economic prospects for 2014 looking better, the aim is to make a full-on effort to bring the total to 10,000 jobs, with a focus on creating employment in rural Ireland, which has been worst hit by the recession.

Hireland launched in January 2012 with a national campaign designed to spark the nation into thinking differently about the advantages of creating jobs over cutting them. By challenging employers to think about what they can do to improve their business through hiring, Hireland aimed to change the national mindset from one of firing as a survival strategy to one of hiring as a growth strategy.

Hireland was created on a budget of €149 and developed from goodwill and pro-bono support from the media and marketing community, small businesses, the unemployed, business associations and philanthropic recognition from the Arthur Guinness Fund, Social Entrepreneurs Ireland and the Ireland Funds.

Masterson says when Hireland was started, the country was on its knees. Fear and a sense of desperation ruled the economic landscape. “We wanted to create a positive campaign that would encourage positive thinking and fight this depression. The can-do fighting attitude of Ireland was exemplified by the companies that pledged with Hireland and now in 2014 we are seeing the first genuine green shoots of positivity,” she added.