Independent in deal with Munster Rugby

The Irish Independent has signed a partnership with Munster Rugby which sees it become the club’s official newspaper. As from tomorrow, the Independent will publish an eight-page free supplement available in Munster counties. It will feature first team news and stories and articles on the grass roots of Munster schools and club rugby, along with player diaries, coaching insights and  profiles of former Munster players. 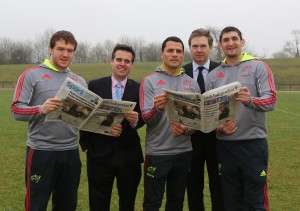 Munster Rugby chief executive Garrett Fitzgerald said the deal allows the club reach supporters each weekly, while giving the work of provincial schools a higher profile. Stephen Rae, editor, Irish Independent, said that as from tomorrow, Munster readers and fans can savour the Thomond Park-like atmosphere early, as the team prepares to take on Racing Metro, in an effort to reach the knock-out stages of the Heineken Cup.