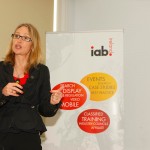 Alison Fennah, IAB Europe, at the launch of the Mediascope online study in Dublin yesterday

When it comes to shopping online, the Irish also index higher – 97 per cent versus the EU average of 87 per cent. When researching online and shopping offline, Ireland scores 88 per cent and the EU 79 per cent. Mediascope shows the internet is increasingly becoming the channel of choice for consumption of other media, including TV, radio and press. The study indicates 81 per cent of Irish internet users watch TV online.

For more about the IAB Ireland, go to  http://iabireland.ie/