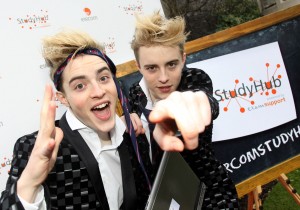 X Factor twins Jedward haves signed up to Universal after a brief relationship with Sony. Manager Louis Walsh has agreed a new contract for the 18-year-old twins John and Edward Grimes from Lucan, Co Dublin.

Jedward concerts in Dublin and Belfast have sold out. Their debut single, a remake of the Queen hit Under Pressure, was a duet with Vanilla Ice. It got to number two in the UK top ten but dropped out a week later.