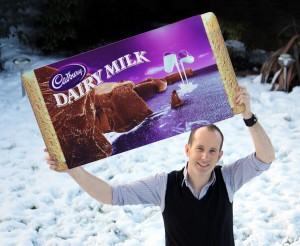 A graphic designer from Tralee has been selected as one of the five finalists who designed a wrapper for Cadbury Dairy Milk bar in tandem with TV3 show The Apprentice. If Paul Ruane of Midpoint Creative wins his wrapper will be produced and in shops around the country and perhaps even further afield.

Ruane used the iconic image of the Cliffs of Moher as his inspiration. “The theme was ‘Irish’, and I have always thought of Cadbury Ireland as the Irish Willy Wonka,” he said. “My design is a magical Ireland where everything is made from chocolate.

“The giant ‘glass and a half of milk’ are pouring milk into the sea where the chocolate is made. This sea has then created the chocolate Cliffs of Moher. I think it’s very Irish, without being too twee.”

A public vote will determine which design is worthy of making the chocolate bar wrappers. People can vote at www.cadbury.ie/theapprentice or text  ‘Apprentice A’ to 53799.