Copywriter Robert McBride has been named as this year’s winner of the IAPI One to Watch award. The honour is an annual award to recognise the achievement of excellent professional standards, creativity and innovation in marketing communications by a graduate student of the IAPI/DIT advertising and digital communication postgraduate programme. The course is now in its third year with 23 students enrolled. 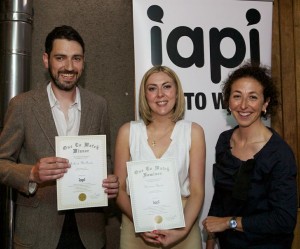 McBride was presented with his award in Odessa last night. He is a maths graduate from the University of Liverpool who now works alongside freelance art director Eamonn O’Boyle. This year’s runner-up is Theresa Byrne. Sixteen students enrolled for the IAPI course in the last two years. Since graduating, 93 per cent of first year students got permanent jobs in adland and the rate was 94 per cent last year.