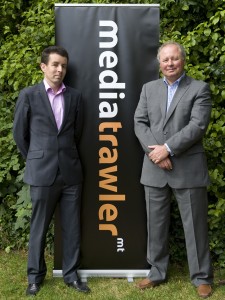 The MediaTrawler online service is extending its reach to cities on the east coast of America and plans to enter the UK next year. Launched last year by pitch doctor and former MEC director Michael Quilty (right) and David McCarthy, an ex-KPMG technology consultant who developed Perlico’s billing platform, MediaTrawler offers media buying, selling and bidding, with a focus on SMEs with no agency ties and on modest budgets.

MediaTrawler offers deals with RTE TV and radio, the RTE Guide, Setanta, Today FM, Red FM and WLR in Waterford. Other media brands include the Irish Examiner, Electric Media, RTE.ie, iBelieve, Visualise and Carlton Screen Advertising. Quilty said they hope to reach a deal with Independent News & Media (INM). He said MediaTrawler is custom-made for consumer magazines – “it’s a no-brainer as they are less easy to find”.

Quilty said outdoor’s pricing model is proving hard to crack, while TV3 has not signed up as they want their advertising to be premium. While he admits MediaTrawler is disruptive and disturbs the status quo, he denies it should unnerve media executives who work on direct sales as they operate on a one-to-one with clients. A recent study in the UK shows that for every £1 spent on advertising it equates to £7 in consumer purchases.

“Adspend in Ireland is just 0.4 per cent of GDP, compared to 1.05 per cent in the UK,” Quilty told Marketing.ie. “So there’s much to be gained by convincing SMEs to advertise. The market is limited due to tight margins. Spend below €100,000 isn’t properly serviced by agencies. We’re saying it’s good to advertise and get out there more. Our service is all about advertising made easy and we aim to double the SME adspend.”