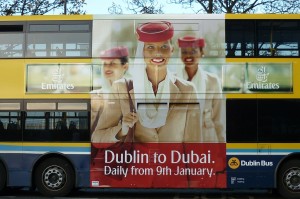 Emirates has launched a media campaign in Ireland using MediaVest to promote and support its new Dublin to Dubai service which gets off the ground in early January. The activity comprises national press, online and outdoor advertising. A heavy focus on outdoor covers bus T-sides, 96 and 48 sheets, Metropoles, building wraps and Dart and Luas wraps. An extensive PR campaign handled by Grayling is also underway.

Commenting on the marketing push, Emirates vice president for the UK and Ireland, Laurie Berryman, would only say the campaign is a “significant investment”. Dublin is the airline’s 29th route in Europe and the 119th destination worldwide. “In line with our corporate ethos, what we do, we do well,” Berryman said. “One of our main objectives is to communicate Emirates’ values of world-class service.”

Emirates continues to expand its global footprint, having launched Geneva, Copenhagen, St. Petersburg, Basra and Baghdad this year. It will continue with six other new route launches, namely Rio de Janeiro, Buenos Aires, Harare, Lusaka, Dallas and Seattle, planned for 2012. The airline is due to hold a media briefing about the new Dublin service at a breakfast in the Shelbourne hotel on December 13.