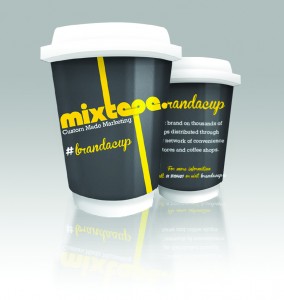 Mixtape Marketing is rolling out a new ambient form of advertising with the launch of Brandacup. The service offers advertisers and agencies a way to promote brands on takeaway coffee cups bought in convenience stores and coffee shops. Mixtape organises the print and distribution of cups through a network of locations.

Albi Larkin, co-founder of Mixtape, says Brandacup allows advertisers target convenience store shoppers at the point of purchase. The branded cup is in the hand of consumers after they leave the store and may even sit on office desks for much of the day. Mixtape launched Brandacup with activity for Kellogg’s Nutri-Grain.

Research into the €43 million on-the-go market shows coffee is a major footfall driver into convenience stores. Some 83 per cent of consumers say it’s the main reason for a store visit, while 51 per cent buy coffee at least once a day and 43 per cent buy ten or more cups a week. For more details, go to www.brandacup.ie