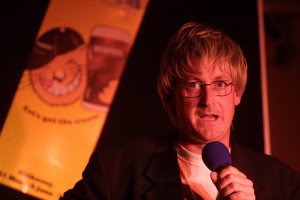 Comedian Barry Murphy will be the special guest at the Marketing Society Christmas lunch next month. A co-founder of The Comedy Cellar in Dublin, he is considered to be one of Ireland’s most talented stand-ups. He is best known for his role in the Apres Match post-football match sketch on RTE Two, alongside Risteard Cooper and Gary Cooke. Murphy plays the wooden Frank Stapleton and a whiney-voiced Liam Brady.

A Leeds United fan and aspiring scratch golfer, he has voiced numerous commercials down the years.

His Gunther Grun German bondholder character may well have some insights to share with Marketing Society members as Ireland emerges from the EU/ECB/IMF bailout. Grun told Marketing.ie that provided there’s no burning involved, being a bondholder is usually considered safer than being a shareholder, because if a company liquidates it must give first preference on outstanding payments to its bondholders.

The Marketing Society Christmas lunch is in the Shelbourne Hotel on Friday, December 6.