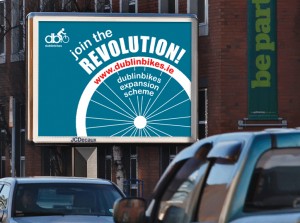 JCDecaux and Dublin City Council have launched an outdoor campaign to encourage Dubliners to join the Dublin Bikes public sharing scheme. As the number of cyclists in Ireland has increased hugely in recent years, the campaign is urging people to ‘join the revolution’ by signing up to the scheme. The French contractor believes it is a message that should resonate just after Christmas as people focus on personal fitness.

Annual membership is €20 with over 95 per cent of journeys being free. Tony O’Flanagan, marketing director, JCDecaux Ireland, said the campaign is built across key outdoor sites in the capital to reach the target audience and encourage them to join the bike scheme as they go about their business in the New Year.

Since its launch in 2009, over six million bike  journeys have been made and there are 36,000 active subscribers. The scheme is being expanded with new stations being built in locations east to the Docklands and west to Heuston Station. When the expansion is completed this summer, the number of stations will have more than doubled from 44 to 102 and the bikes total will have almost trebled from 550 to 1,500.

For more details on the new dublinbikes stations, click on http://www.dublinbikes.ie/Expansion-News