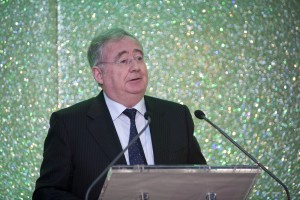 A report on what advertising contributes to Ireland’s economy shows the industry is worth €5.3 billion in terms of gross national product (GNP). The Deloitte report, entitled Advertising: An engine for economic growth, is the first of its kind to be commissioned and is sponsored by Core Media, Google, Independent News and Media (INM) and RTE. It was formally launched by the Minister for Communications, Pat Rabbitte TD (above).

The report’s key findings indicate that for every €1 spent on advertising, on average €5.7 is generated. Advertising supports 30,000 jobs and the industry employed 7,000 people last year. Ad spend accounts for 38 per cent of Irish media revenues. Some €938 million was spent on advertising media placement in Ireland last year and €8.3bn in offline sales were researched on ad funded websites before offline purchase.

For a related story on the IAPI Adland Census, click on http://iapi.ie/census/