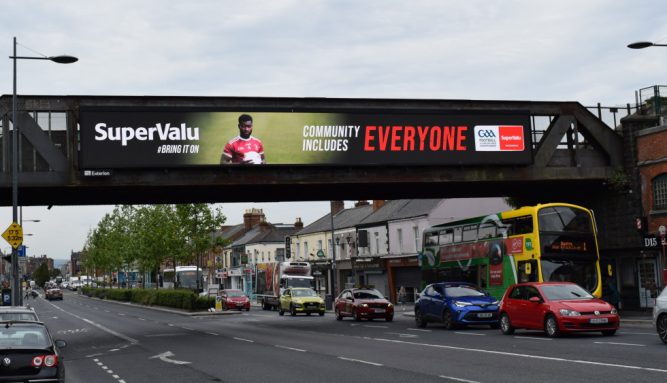 The retail sector was by far the biggest spending category on out of home (OOH) in the first half of 2021, a report by PML Group shows. The Posterwatch figures show that the sector accounted for 18 per cent of OOH display value across the first 13 cycles – December 28 2020 to June 27 2021. Supermarkets account for around 60 per cent of the retail spend.

Musgrave Group, Tesco and Aldi are all among the top 10 OOH advertisers for 2021 to date.

Despite restrictions on hospitality for much of the first six months, beers and ciders continued to invest in the medium and was in second spot in terms of display values. Diageo remains the country’s top spending OOH advertiser with Heineken also among the top 15. The sector is up significantly on 2020 but compared to 2019 it is down by 18 per cent.

The food category has increased its display value by 34 per cent, compared to H1 last year.

The increase compared to 2019 is 28 per cent. Kerry Group, Kellogg’s, Glanbia and Kraft Heinz were prominent advertisers in this sector. Media was in fourth spot where Sky is the top advertiser. Disney also features among the top 10 advertisers in H1, employing OOH extensively to showcase releases on its Disney+ recently launched streaming service.

Mondeléz comes in at third spot, behind Diageo and Sky. Other advertisers to feature in the top ten include McDonald’s and Coca-Cola. Digital OOH advertising now accounts for about 28 per cent of investment in the channel by brands. PML Group expects this to increase in H2 with the launch of Digital Bridges and Adshel Live phone kiosks.

Colum Harmon, marketing director, PML Group, said that despite the economic uncertainty, investment in OOH from top brands remains strong. “We’ve seen parallel investment by media owners to improve the quality and choice for clients,” he added. “At PML Group, we invest in data, tools and services to connect these brands and the audience that OOH delivers.”