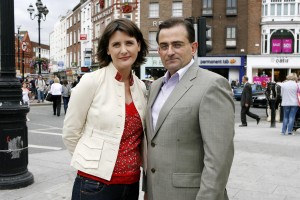 RTE is to broadcast a new television series in the autumn aimed at raising important consumer issues and championing the rights of Ireland’s buying public. The Consumer Show will be fronted by Prime Time reporter Keelin Shanley and Eddie Hobbs (pictured) will focus on information and advice.

They will examine what the public knows about consumer rights and look at case studies which expose poor value, sharp practice and low standards. Tina Leonard, former director of the European Consumer Centre and a contributor to Today With Pat Kenny on RTE Radio 1, will also feature regularly.

Coco Television is keen to hear from viewers with a story to tell, from people who have been ripped off by a rogue tradesperson or service provider. Or from anyone who feels they were fooled by the small print. Contact may be made by calling 01 412 5457 or by emailing consumers@rte.ie

Meanwhile, George Lee returns to the airwaves this weekend after his spell as a Fine Gael TD. During the summer, Lee will present Mind Your Business on RTE Radio 1 at 10am on Saturdays, the slot normally occupied by The Business, presented by John Murray.

Lee’s return has caused some controversy as the series is one of the first two shows commissioned under RTE’s new Independent Radio Productions (IRP) division. The IRP was launched in April and RTE said that it intends to spend €500,000 on the first round of awards.

People in the independent sector have said that the IRP programmes were meant to support diversity and new talent. Mind Your Business is produced by Aideen McLoughlin.