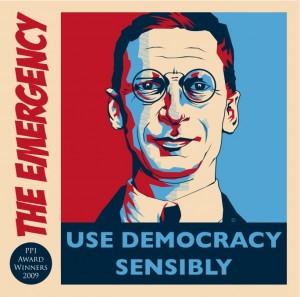 The six satirists behind The Emergency show, who are well known to Newstalk listeners, have launched a Christmas CD called ‘Use Democracy Sensibly’ with six tracks featuring new material and some ‘greatest hits’.

The line-up of sketches include ‘The Emergency’s Christmas Carol’ and ‘A TD’s Christmas Song’. The bonus tracks include ‘Vincent Browne and the celebrity candidates of doom’ and ‘The judges discuss their pay’.

The six satirists who make up The Emergency are Morgan Jones, Eoin Byrne, Joe Taylor, Dermot Carmody, Karen Ardiff and Nick McGivney. McGivney is a prolific blogger and Marketing.ie columnist.

The tracks were recorded at Mutiny and mixed by Mark Richards and Will Farrell. The backing track is by Dylan Jones and John Phelan of Dragon Design was responsible for the cover image.

The CD is on sale in Tesco and HMV.