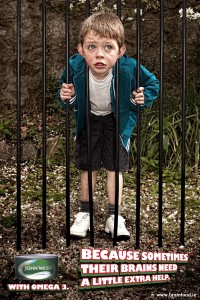 John West has launched its first advertising campaign in Ireland in over ten years with new work by Boys and Girls. ‘Brainfood’ highlights the nutritional values of Omega 3 for mental development, cognition and concentration using outdoor, press, radio and online ideas.

The outdoor and press treatments show two five-year-old boys getting into spots of bother by not using their brains. It so happens, Boys and Girls’ creative director Rory Hamilton’s first ever job in adland was to write a radio ad for John West when he worked at Arks.

The ads were shot in Dublin by photographer Adrian Stewart. Mediaworks looks after buying and planning.