Electric Ireland is using the TV3 and 3e takeovers to promote their Powering Kindness campaign this week with the slogan ‘Do a good deed and donate it to charity’. Ireland has been going through a tough time with many people caught up in the negative day-to-day pressures of personal situations. Ireland is seen as a giving nation which prides itself on giving to and helping others. Electric Ireland wants to make it easy for people to do a good deed for a friend/group or organisation, as well as raising badly needed funds for three charities.

People are being urged to do a good deed and talk about it on poweringkindness.ie and on social media. While online, people can bank their good deeds for Concern Worldwide, Focus Ireland or Special Olympics Ireland. No financial outlay is required, the currency is good deeds and the charity with the most deeds receives 50 per cent of the final donation, with the other two charities each receiving 25 per cent.

Margaret Colton, Electric Ireland’s head of marketing, said the aim this week is to tap into and reignite the generous spirit inherent in Irish people by asking them to do a simple kind deed for someone else and pass it on. Colton said the aim is to encourage people to be part of Powering Kindness Week. The various platforms available through TV3 allow the communication of the message to a wide and relevant audience. 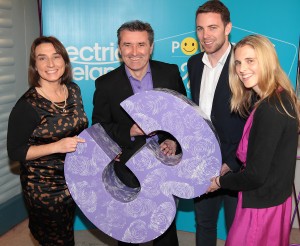