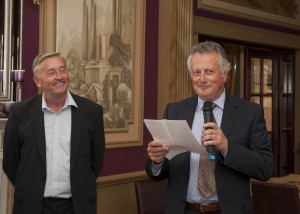 Irish International managing director Ian Young has paid tribute to John Fanning as the former McConnells boss was presented with a lifetime achievement award by Marketing.ie. Speaking at an event in Gleesons of Booterstown, Young said Fanning’s intellect, reasoning and ability to articulate made him “a unique asset” to any business. He said his presence and leadership in McConnells were “absolutely pivotal” in making the agency such a force – not just in advertising in Dublin, but in Irish business – for all of his time there.”

Young, pictured above right, said:  “Any close-up experiences I’ve had with John served to underline his sheer likeability and his integrity,” Young said. “That integrity isn’t an acquired business skill. It’s not something he thinks about at all. As far as I can tell, he just behaves decently and honourably all the time. If I have to thank John for one thing, on behalf of all of us who have worked in advertising, it’s for representing every one of us, making us and what we do, just occasionally, recognised, respected and valued,” he added.