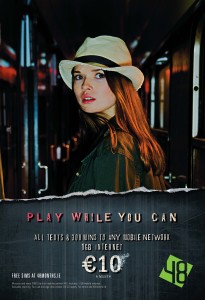 Movie buffs may have thought they were in line for an international exclusive with the global premiere of ‘22’, a horror centred on young people disappearing for no apparent reason. But it has was revealed  that the trailer for the edgy indie thriller was in fact a teaser for a new ad campaign for 48, Telefonica Ireland’s mobile network targeted at 18 -22 year olds. Six sheet teaser posters (pictured above) were run in UCI cinemas.

The 48 ‘It’s Your Time’ campaign was created by Brando with MediaVest handling the media.

‘22’ was directed by Milan da Silva and the director of photography was Antonio Riesta, renowned for his work on Frida and Mama.  A make-belief production company, One Eight Productions, was also set up to add authenticity. Aoife McGuigan, 48’s brand marketing manager, said 22, which was filmed by Brando’s Prague office, has been viewed over 350,000 times online and has resulted in record traffic to 48’s website.

The teaser follows three friends InterRailing through Europe; a young couple in love about to run away with one and another; college classmates on an adventure weekend and band mates about to play the gig of their life. As the story unfolds, they learn that there is a darkness coming and that to escape it might be impossible, what is done cannot be undone. To watch the trailer, click on https://www.youtube.com/watch?v=qGc2_5l7dGI