One to Watch winners announced 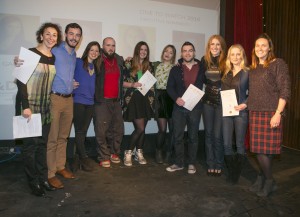 Client executive Ailbhe Jordan and creative Dave Hurley have been chosen as the IAPI One to Watch winners for 2014. Jordan, who is joining MediaVest, was among four nominees for the executive award, along with Craig Dempsey, a digital planner at Carat; Orla Garrigan, junior project manager at In the Company of Huskies and Aisling O’Sullivan, research and insights manager at Telefonica’s O2 Ireland.

Now in its fourth year, One to Watch recognises the achievement of professional standards, creativity and innovation in marketing communications by a graduate student of the IAPI/DIT advertising and digital communication postgraduate programme. The nominees are voted by their peers.

The winners are decided by lecturers from the postgrad. It is the first time there has been both an executive student and a creative student winner. For more on the eight nominees, click on http://iapi.ie/about/elect.html