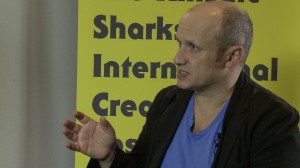 Irish filmmaker Lenny Abrahamson talks about his next movies Frank and Room and why he’s not “a gun for hire” in Hollywood in a second series of interviews with Marketing/tv released today. Frank is a comedy starring Michael Fassbender as a musician who wears a fake head. Room is based on Emma Donoghue’s harrowing story of a mother and son kept in a room for years. Abrahamson is currently devising the screenplay.

The director of Adam and Paul and What Richard Did discusses working with his lifelong friend Ed Guiney of Element Pictures, Government funding for Ireland’s film industry and how studying philosophy affected his career. In a second series of of interviews, film producer David Puttnam speaks about living in West Cork for 25 years, his work in the House of Lords and as an educator, and being a Tottenham Hotspur fan.

Abrahamson and Puttnam were interviewed by Michael Cullen at the recent Sharks festival in Kinsale.