Independent News & Media (INM) and the National Consumer Agency (NCA) may sue Associated Newspapers Ireland over its Irish Mail on Sunday special edition at the weekend when it ran with a pretend Sunday Tribune masthead and front page design without permission in an effort to increase sales. 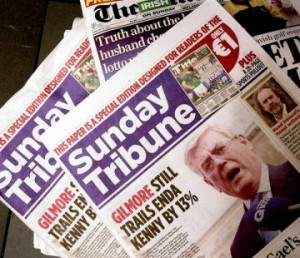 The Irish Mail on Sunday with a wraparound cover of the Sunday Tribune. Photo: The Irish Times

Publication of the Sunday Tribune has been put on hold until the end of February while the receiver, McStay Luby, tries to find a buyer or a group of new investors. Associated Newspapers published 25,000 copies of the Irish Mail on Sunday with a cover wrap designed to replicate the Tribune on shelves.

INM plans to make a formal complaint to the National Newspapers of Ireland (NNI) and will request that Associated Newspapers be expelled from the industry body. The move was described by the NUJ as a new low in journalism. Tribune editor Noirin Hegarty said she was “appalled and shocked”.