Rosie Arnold started at AMV BBDO two years ago after 33 years at Bartle Bogle Hegarty (BBH). She graduated from Central St Martins with a BA (Honours) in graphic design while moonlighting for the new tiny hot shop, BBH. While at the much-lauded agency she won awards for Levi’s, Pretty Polly, Robinsons, Audi, Heineken, Shell, Yeo Valley and Lynx.

“Yes,” she says with a chuckle, “Lynx!” The humour relates to her talk at last year’s Sharks when she explored the contentious issue of stereotyping in ads. Unilever’s Lynx laddish ads got some folk all hot and bothered for showing an anti-perspirant spraying man being chased by hordes of bikini-clad women on a beach. Others could appreciate the fun of it. 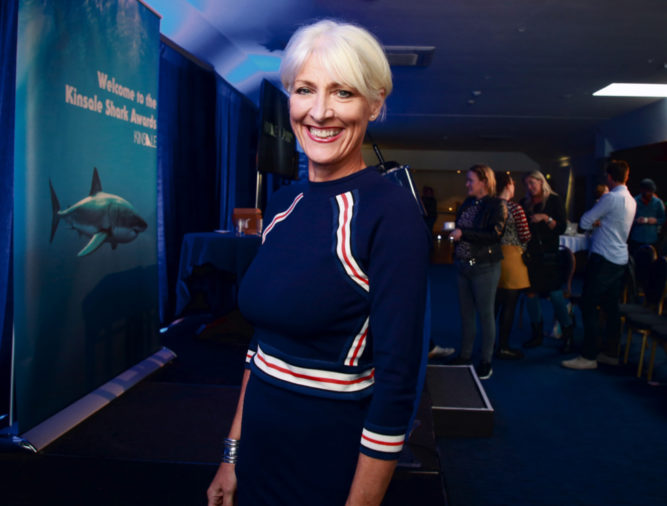 As her BBH mentor John Hegarty (“an absolute inspiration in my life”) said in a cover story interview with Marketing.ie in 2006, the British love irony. “Humour’s important as it’s the enemy of authority and a great way of getting people to listen,” Hegarty insisted. “Of course it’s subjective but as a creative person in advertising you can either do humour, or you can’t.”

Arnold was made BBH’s deputy executive director in 2009. In 2012, she became the second female president of the D&AD global design and art direction in the charity’s 50th year. During her term, she introduced the first new pencil in D&AD’s history, The White Pencil,   awarded for work that not only sells, but also tries to make the world a kinder place.

Arnold was honoured to be made president (“I get to be president a lot!”) of the Thinkbox Academy in 2017. She hopes to promote acts of altruism done through advertising, using TV to “un-stereotype the world”. She says that what prompted her to leave BBH after 33 years was an urge to continue doing great creative work while trying something different.

Arnold will preside over the judging at the Kinsale Sharks in September. Creative festivals are nothing new to her. A regular at Cannes, she believes the Sharks scores higher as a hub for creatives. Delegates chat about campaigns and issues while “having the craic”. Cannes has become rather joyless as delegates shifted the emphasis to networking and doing deals.

So how did she end up taking up fencing? She always wanted to give it a go and ball games like tennis and golf were a no-no for her. One day she was at a village fete in Cornwall and there was a fencing display on. She gave it a stab and touché, she was hooked – so to speak. She says it is like a physical chess as you have to think a lot about the next move you make.

“I do foil which is where the target is your torso, front and back,” she said. “It’s strategic and you’ve got to deceive your opponent to make the hit.” Rather curiously, when she and her brother were clearing out her mum’s house, they found fencing medals in an old trunk belonging to her dad from the early 1900s. So maybe swordplay is in the Arnold genes.

Arnold’s move to AMV BBDO after 33 short years at BBH was prompted by a stock take following her husband’s death after two tough years caring for him. When she went back to work it felt wrong to just pretend life would go on as normal. BBH had been hugely   supportive to her over a really trying period. But she needed a change in her career. 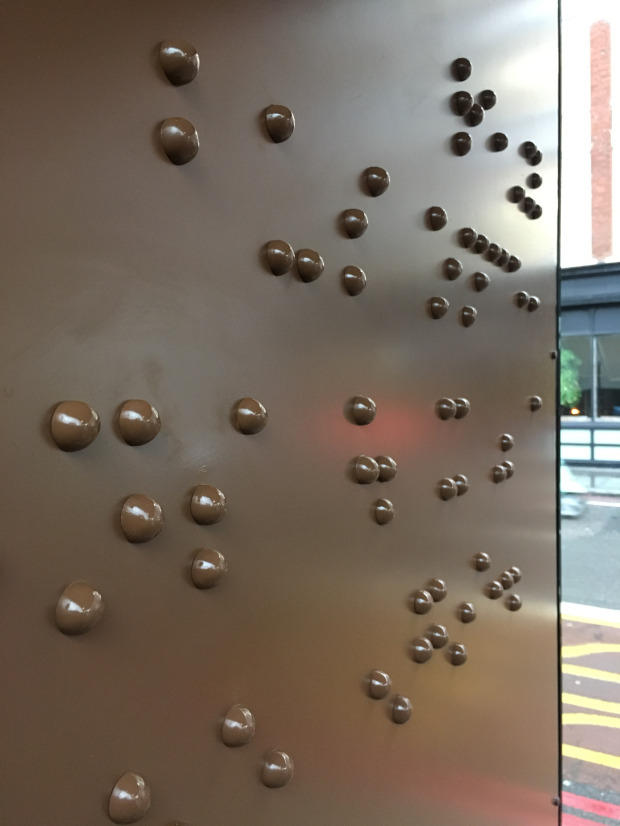 Rather sweet ideas: The Maltesers ‘Braille’ campaign was Rosie Arnold’s first campaign after joining AMV BBDO. As part of the opportunities afforded to young talent though its Hatch initiative, the work was given to a team that had only just started at the agency. Arnold has worked on other Maltesers’ campaigns for Mars, including one on menopausal women.

Her move to AMV BBDO was made after much soul-searching. She was torn between taking a CCO role, which felt like a logical step, or staying on as an art director which would allow her to come up with ideas, be close to the work and nurture talent. She looked at what AMV was doing for Sainsbury’s and how they turned around Curry’s with the Jeff Goldblum work.

The agency culture and people who were empathetic and could laugh at themselves made an impression. She had worked with executive creative directors Alex Grieve and Adrian Rossi. Arnold’s first work at AMV was the Maltesers’ braille poster. The campaign started with a Channel 4 competition and sought to tackle the lack of representing disabled people in ads.

Arnold says the ads avoid being patronising by using insights from people with disabilities and without putting words in people’s mouths. Stereotyping in ads is an issue close to her heart and mind. “This year has seen a lot of change,” Arnold said, “and much of it is down to the ‘Me Too’ campaign. It (sexual molestation and worse) is the hidden evil.”

While admitting to being a feminist, she prefers to use her own word – ‘equalitist’. The more women there are (in advertising), the more will be attracted to the business. She also wants to see more youth coming through the ranks. AMV has a scheme called Hatch which sees up-and-coming creatives get trials and then, provided all works out, permanent jobs.

Lynx ‘Find You Magic’ featured every creed and colour disability as a vignette. But Arnold is anxious to use a range of people rather than an ad being about using a wheelchair user or someone of mixed race. She makes the point that in some European markets they will not run an ad with a black person in it. Such behaviour by marketers should never be acceptable.

Arnold is a bit of traditionalist in that she likes to draw things using pen and paper rather than on a computer. She says it is easy to use existing imagery when you are Mac-ing something up. When you sell it to the client, you try and replicate the image you have used so it is much harder to come up with original creative concepts. Loose drawings work better.

Arnold believes in work-life balance. After her husband died and she went back to work she had to decide what to do with her dog Oscar. She took in a student but he soon started on another course and she had to hire a dog walker. She then took in a second student, a sculptress from Birmingham, whose life is hectic and who often arrives home after her.

Her two sons have been tremendously supportive to her. They told her that it is just as important to show women you can have a career which makes you happy, instead of sticking with something that does not suit you at all just because you believe you are doing the right thing for women. They insisted it is about allowing yourself to have the life you want.

While Rosie Arnold’s early ambitions of being “the next Picasso” may prove problematic, she recently turned her hand to sculpting and a bronze casting course. Content in her own skin, she cherishes her relatively new career role. Hugely endearing, she exudes a natural charisma and candour not readily synonymous with adland creatives touched by a fragile ego.

People who do not understand the creative process imagine that there is a formula to it and it is like pressing a button. Eureka. They believe that agencies keep it a secret. They think they know what music should go with an ad right away, which is complete and utter bunkum. The idea and magic come from the creative process and the things that happen unexpectedly.

What about the suggestion made by clients from time to time that creatives are divorced from reality in that they are either dismissive at worst or unperturbed at best at the economic reality that advertising must shift product? She responds by saying that it is a myth creatives are only chasing Lions or Sharks. She insists creative ideas sell better and build brands.

Now, there’s something really meaty for the Sharks organisers to get their teeth into. 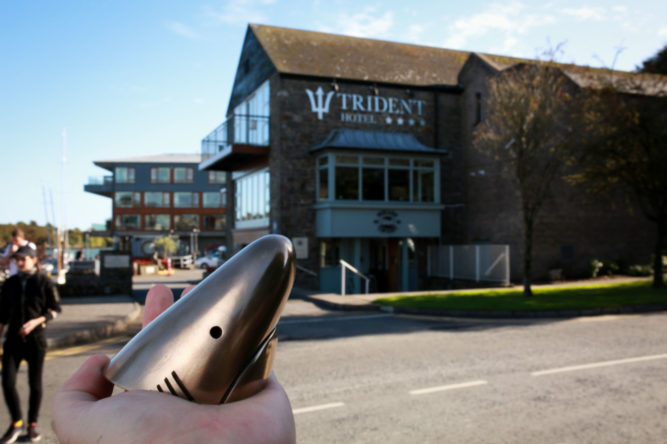 The 55th annual Sharks festival runs for three days in Kinsale from September 27-29.
Marketing.ie is the festival’s media partner.

View all posts by Michael Cullen →
Press into action
Milking it