Research undertaken for the National Dairy Council (NDC) illustrates the issues confronting food producers and particularly among millennials. A two-year study looked at Irish attitudes to milk and dairy products, but particularly focused in on the underlying drivers of change in dairy consumption among Ireland’s millennials.

Since 2016, Ireland had the highest per capita milk consumption in the world, with Scandinavia and New Zealand not far behind. As such, dairy is in a considerably stronger position in Ireland than in most other markets, but with some evidence of negative trends among younger consumers that mirror those seen elsewhere.

The typical Irish home consumes 6.2 litres of milk per week, with higher levels driven by children and among life-stage groups where pre-teen and teenage kids are common. Focusing in on consumption by different demographic groups, the biggest shifts show up in Dublin and among middle-class consumers particularly. 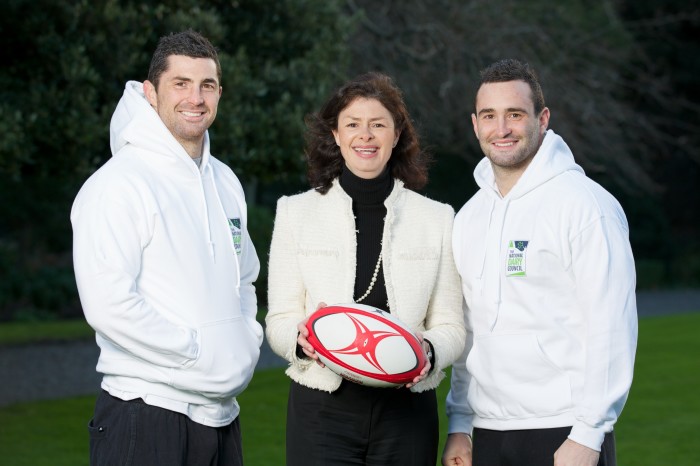 Goodness advocates: Women generally do not buy into the notion of milk being about positive health and making them feel stronger to the same extent that men do. This article by Larry Ryan summarises themes from a research paper presented recently at a joint NDC/Marketing Institute ‘Dare to Dairy’ conference. Pictured is NDC’s Zoe Kavanagh with rugby players Rob and Dave Kearney.

Full and low fat milk use and substantial growth by vitamin-fortified milk and indeed of skimmed milk. Soya and almond milk feature at a low level. About five per cent of Irish adults consume almond milk soya accounts for just four per cent. As such, the local impact of substitutes on dairy milk has been remarkably limited.

Milk continues to enjoy a positive and virtuous image, although millennials and women under 35 harbour substantial misgivings that it is hard to digest, fattening and can spark allergies. Older women are much more positive about milk, but often do not   drink it themselves: they see it as something more worthwhile for their children.

Women generally do not buy into the notion of milk being about positive health and making them feel stronger to the same extent that men do. In Ireland today, roughly 22 per cent avoid milk at some level and as many as 39 per cent avoid dairy products.   But about two out of three of all such ‘avoiders’ have a largely positive perspective of milk; they like it but consciously try to cut down on the amount they consume.

The NDC study also examines the proportion of the population following special or exclusionary diets. It will surprise no one that as many as 43 per cent of the adult population – and indeed six per cent more than last year – endeavour to maximise the amount of protein in their diets. The trend is more pronounced among millennials.  Interestingly, commitment to sugar free diets is reducing, although still more pronounced than vegetarianism, lactose-free and indeed vegan diets.

Enduring issues for millennial consumers are around trust, as seen in many other sectors. They are dubious about large companies and these doubts extend to dairy. There is undoubtedly a need to build trust in the sector, as well as ensuring that dairy farms do as much as possible to minimise their environmental impact.

Global data released recently by Rabobank shows that the rate of growth of milk alternatives or substitutes in Ireland is substantial, but the NDC study emphasises that such growth remains off a very low base and is limited to a consumer group with a much diminished pre-existing milk or dairy consumption habit.

What is worrying is that the numbers who feel that dairy may cause allergies remains quite high: 22 per cent of millennials believe that dairy has an allergy connection, running ahead of the accepted level of adverse reaction to dairy, which lies in the low single digits. For some, claiming that they exclude milk due to allergy is a trendy perspective, driven much more by diet bloggers and fashion than by scientific fact.

Apart from this, the study reminds us of the importance of trust, environmental sensitivity and of companies behaving in a personable and pro-consumer manner.  None of these factors can be characterised as issues more likely to befall dairy than other food categories. However, they do remind us that millennials are fadish and prone to not committing wholeheartedly to their food principles and beliefs.

NDC’s effective and ongoing Complete Natural campaign aims to counter the negative mind-set characteristic of some millennials in respect of the category.

Larry Ryan is a director of B&A