Entrepreneur and motivational speaker Jim Rohn says we are the average of the five people with which we spend the most time. In turn, we judge brands like people, by the company they keep. Brands become an average of their exposures. When advertising shows up alongside inappropriate content, it irks. Another aspect of context is modality.

An ad we see in a newspaper or magazine is different than a sponsored post we view on Facebook. Collectively, we are incapable of processing information neutrally, so contextual clues influence us. The sheer presence and choice of available media channels impair our decision-making and undoubtedly impact on the effectiveness of reaching audiences.

Our appraisals have become so cluttered, so challenging to navigate, that many rely heavily on the social cues of the most significant players who, in turn, invest ahead of the market in emerging channels. That coupled with the championing of cost above quality spread, and the former’s pre-eminence, is regularly at the expense of environmental effectiveness. 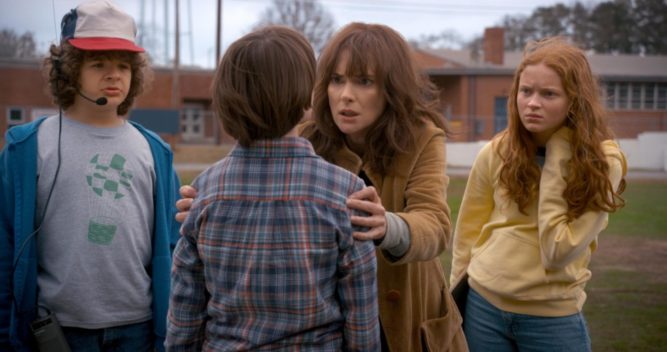 Terrestrials respond: The BBC, Channel 4 and ITVare poised to combat the threat posed by Netflix and Amazon, by committing £125 million to Freeview over five years. Freeview allows viewers to watch all live and on-demand content. No such move is envisaged for Ireland, as RTE plans to roll out its new player. Pictured is Winona Ryder in Netflix’s Stranger Things.

The reAction independent study, released in June by Research & Analysis of Media (RAM) for NewsBrands Ireland, should strengthen the hand of print advertising. Results found that ads in newspapers can be twice as effective compared to industry benchmarks in other media. The action is supported by the level of trust in the medium unequalled in other channels.

On the back of a decade of declining circulations and advertising spend diverting openly to other channels – namely digital – the ReAction data gives a forcible proposition for NewsBrands Ireland titles, alongside INM’s Book of Evidence published in 2016.

It challenges the rank of press as a suitable medium for increased ad budgets. In the wake of information immediacy, the use of press as a credible and trustworthy product is certain. Beyond the product, its commercial acceptability is clear. Juxtapose any press format with the intrusive nature of online, and active avoidance from audiences, and its status soars.

The growing demand for data and statistics has largely ignored by the medium for some time. The absence of ongoing stats around readership and other measures and the relationship with online properties showed a distance in responding to the pressures of today’s advertising landscape. It is akin to a defendant in the court refusing to answer under cross-examination.

We, the jury, have been left to make our own verdict. There has been an expectation and acceptance of readership declines, a reality that should not incite fear. It speaks to an engaged readership base, of whatever size, still willing to pay for a quality product. The eulogy for print media has existed for a long time, with an early citation dating back to 1984.

It was made by the character Dr Egon Spengler in the movie Ghostbusters, which seems as ill-placed as saying Google is now a spent force. Granted, people are spending less time in print than ever before, but the quality of that time and its effectiveness as a medium is arguably increasing in the advent of distrust in other media, with fake news the major culprit.

As marketers, the practice of buying large amounts of the high-quality exposures against segments for a relatively low price should prevail. You may not be able to un-ring a bell, but the medium is not on its death bed and it is now worth unearthing a new spirited press.

Publishers are reporting digital subscription growth in displacing online advertising as the most important revenue stream. The New York Times posted an increase in their total revenues in May of 2018, in part due to the continued surge in digital-only subscribers. FIPP has created the first Global Digital Subscription Snapshot which outlines the details.

The report shows how this was achieved through investment, an application of analytics and tailoring to local markets. The proportion of subscription to ad revenue was 10:90 in 2012 and FIPP predicts it will boast an equal 50:50 standing with ads by 2020.

The survey of 1,587 global executives found that 75 per cent of executives say they have seen brands advertising alongside distasteful content, with 77 per cent claiming it may damage a brand’s reputation. Some 62 per cent say brands are responsible for where ads are placed.

Chris Cashen is director of media at Javelin