With a spring their step, Fáilte Ireland hopes to convince more Irish people to find the hidden gems close to home this summer.

Alison Levins talks to Michael Cullen about the current campaign

The campaign showcases various popular locations across the Republic, from Sliabh Liag in Co Donegal to the Beara Peninsula in Co Cork. Also included is Lahinch in Co Clare, Birr Castle in Co Offaly and the National Heritage Park in Wexford. The TV and cinema ad was directed by Antidote’s Brendan Canty and voiced by singer-songwriter Lisa Hannigan.

The Dermot Kennedy track, ‘Power Over Me’, provides the soundtrack. This year’s €6m budget compares to €4m spent last year, with the increase allowing Fáilte Ireland to spread its campaign out over 40 weeks rather than 26. Most of the revenues from staycations went to places outside of Dublin, with rural communities often heavily relying on that business.

A believer in growth strategies: Fáilte Ireland’s Alison Levins has changed her marketing outlook since working with the Enhrenberg-Bass Institute for Marketing Science in South Australia, whose research professor and associate director is Jenni Romaniuk. Two of Levins’s alma maters, Mars and Unilever, are part of the institute’s corporate sponsorship programme. Fáilte Ireland recently became the first Irish company to join the programme.

Domestic tourism, or holidays taken in the Republic by people from throughout the island, is worth €2.4 billion to the State coffers. Research has found that while 92 per cent of people say they will take a holiday this year, only 56 per cent say they will do so at home. If that percentage rose to 58 per cent, revenues could be boosted by about €96m over three years.

While Irish people are well known for being explorers, discovering and experiencing new places and making new friends abroad, they tend to be habitual when it comes to staycations. As many as 78 per cent of home holidaymakers admit to returning to the same place in Ireland as they were before, with 56 per cent holidaying in the same town or village.

When taking a break, Irish people love to discover, with research showing that on average people take part in three activities on a holiday in Ireland, with discovering and sighting by car on 36 per cent, one in three people walking up to 5km and one in five visiting a nature reserve, national park, historic Irish house or castle proving the most popular pursuits.

With this in mind, Fáilte Ireland worked with Lonely Planet in compiling a bucket-list challenge for travellers to discover while holidaying in Ireland. With something new to be explored here – a new taste, a new skill, a new sight, a new memory to share forever – the Lonely Planet’s alternative list challenges the most well-travelled locals to keep discovering.

Globetrotter and Galway native Johnny Ward is thought to be one of the few people in the world to visit all 197 countries across the globe. Ward has been hired by Fáilte Ireland to get on the road and waterways and keep discovering Ireland like he has the world and challenge himself to keep exploring and find hidden locations and experiences around the country.

Taking sights to new heights: Fáilte Ireland’s ‘Keep Discovering’ homes in on the brand repertoire of the Wild Atlantic Way, Ireland’s Ancient East and Ireland’s Hidden Heartlands. The body hopes to increase holidaymakers visiting the cliffs at Sliabh Liag in Co Donegal and luxury self-caterers vacations in Castlemartyn Resort in east Cork. Staycationers interested in a more active break may head to Lahinch and Achill for water sports.

Alison Levins is Bord Fáilte’s head of marketing communications. Levins joined the tourism body last April, having returned to Ireland from Sydney where she was marketing director for Mars. She spent almost a year at Wrigley, in charge of innovation for the Pacific region. She also worked with Unilever’s frozen foods division and on beverage brands at Batchelors.

Having studied marketing and tourism for four years at UL, she knows a thing or two about devising strategies around encouraging people to holiday. While Bord Fáilte’s new campaign does not ignore Dublin, the focus is more on the hidden gems offered by the brand repertoire of the Wild Atlantic Way, Ireland’s Ancient East and Ireland’s Hidden Heartlands.

When it comes to three or four-day holiday breaks, 84 per cent of such holidays are taken outside Dublin. The domestic tourism market is valued at €2.4bn. Almost 80 per cent of Irish staycationers say they are happy with the product, with the activities, scenery and quality of food and drink on offer more than compensating for the unpredictability of the weather.

As Ireland is a small country, many people believe they know it like the back of their hands. That we’ve ‘been there, done that’ or even if we haven’t visited somewhere, that we pretty much already know what it’s like. The kernel of the ‘Keep Discovering’ campaign is about encouraging people who might think they know Ireland to start taking a closer look.

The idea is to show them the many wonderful experiences they have yet to discover. Places like the Waterford Greenway, a quite spectacular 46km off-road cycling and walking trail along an old railway line, or a tour of the Sligo lakelands, which is a five-day cycling tour of Yeats’ country. A seaside holiday in Duncannon, Co Wexford may create lifelong memories. 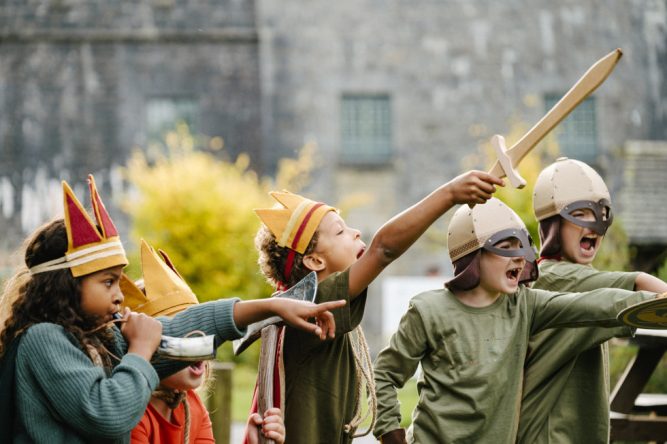 CHILDREN AT PLAY IN BIRR CASTLE

As humans we are born ready to explore, it comes naturally to us. Throughout our lives we are hard wired with the desire to keep on discovering places, people and ideas to find out more about the world. Small or big, shared or personal we value the joy of discovery. But life more than ever is getting in the way of people’s ability to feed the desire to discover.

“We’re more stressed, time squeezed and routine caged than ever and that means we have less space to embrace discovery,” Levins says. Fáilte Ireland research identified that 92 per cent of all Irish people take a holiday. But only 56 per cent of them take a break in Ireland. By increasing that to 58 per cent, Fáilte Ireland will see an extra €32m a year in revenue.

A break away gives us back that space where discovery can flourish, time to breathe and take things in and the excitement of novelty blended together. A staycation in Ireland offers a chance to discover like nowhere else as the country is filled with wonders: a new taste, a new skill, a new sight, a new memory to share that can be experienced on a deeper level.

People are receptive to marketing prompts for staycations over a longer period of the year than they are for overseas trips. Holidays at home tend to have a shorter advance booking period and they are more likely than foreign holidays to occur outside the summer months. ‘Discovery’ became central to the campaign after it was found to resonate with consumers.

Discovery has several layers to it. It can be physical, like a new hike or finding a new view. It can be more personal and discovering what you love, finding your passions, connecting yourself to your nationality. It can be shared discovery, like going on tours of the Lakes of Killarney and finding out more about people, foraging the social glue that connects us.

It can be cultural – finding out more about Kilkenny Castle’s history, arts, music, language and heritage. The campaign is targeted at all Irish adults and in keeping with Fáilte Ireland’s regional strategy it will also try and entice people from north of the border to visit places like Connemara with a high proportion of the media investment directed at this market.

Apart from getting some sun on their back, Irish holidaymakers travel overseas out of curiosity – to see and experience new places. Travel broadens the mind and can help make people more interesting in the company of others, with tales to tell. Fáilte Ireland believes the same rationale applies to staycations and finding the hidden gems on their doorstep.

Tourism Ireland’s job is to promote the island of Ireland overseas as a holiday destination. The two bodies normally work well together, although there was some unrest last year when Fáilte Ireland advertised for agents in North America and Europe.

Levins says Tourism Ireland’s task is bringing in the visitors. Fáilte Ireland looks after them while they are here. Spanish tour operator Catai and some travel agents recently visited Ireland as guests of the two bodies. They saw at first-hand what Spanish holidaymakers might experience. They visited Malahide Castle, the Medieval Mile in Kilkenny, Waterford Crystal, the Jameson Distillery in Midleton, the Rock of Cashel and the Epic emigration museum.

The group also embarked on a boat tour of Cork Harbour. Levins says that most staycationers – which largely means ‘unconstrained adults’ over 55 and families with pre-teen kids – are prepared to spend up to three hours driving. Compare that to travelling by sea to Europe or flying to and from international airports – and all the costs and hassles that go with it.

What Levins and her Fáilte Ireland marketing colleagues want most from ‘Keep Discovering’ is to plant the idea in their minds that a summer holiday or mini-break at any time of the year in Ireland is value for money, fun, enriching and highly memorable. Irish holidaymakers are urged to create their own stories and not to postpone finding the country’s hidden gems.

Discover what Ireland has to offer at www.discoverireland.ie