Mal Stevenson, former creative director at Irish International – now BBDO Dublin – for 30 years, who worked on Diageo for 12 years, gives his take on a newly-published Irish book on Guinness advertising

Let me put my cards on the table. I’ve been accused of many things over the years but being an academic is not one of them. So it was with a degree of dismay that I found a new book called Advertising the Blackstuff in Ireland 1959-1999 to be largely an academic volume, overflowing with theoretical and often excessively analytical opinions.

As a result, I feel I’m not the ideal audience for Dr Patricia Medcalf’s book, despite my role in creating Guinness ads for the 12 year-period immediately after the decades covered in this volume. Divided into four sections, each one dealing with a decade of Guinness advertising campaigns, the book clearly betrays its roots as a PHD thesis.

The author has gone to some lengths to research her subject. With the help of the Guinness archive, she covers print, press and TV advertising for the brand. But it needed many more illustrations to aid comprehension and it was a pity still frames could not have been used to recall the TVCs, which she painstakingly describes at great length. 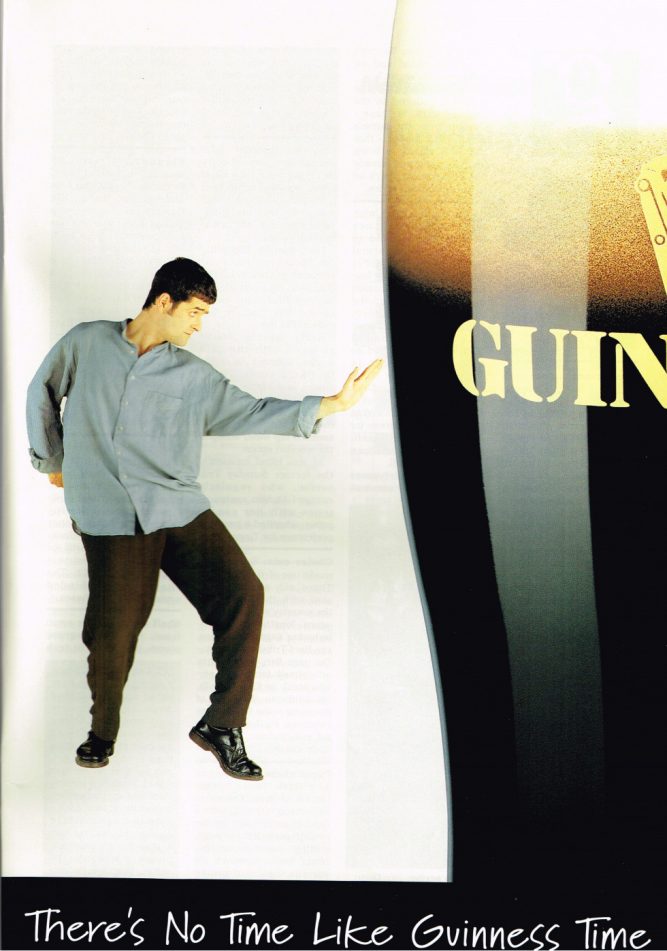 While it is somewhat successful, it makes for laborious reading after a while.

What I did find illuminating is the historical, political and social context in which these communications were made. It offers a comprehensive snapshot of the kind of Ireland that existed at the time the ads were created, with plenty of stats on alcohol-consumption trends, family values and gender equality, topics that are both interesting and informative.

ABOVE, JOE MCKINNEY IN GUINNESS ‘ANTICIPATION’

But there is little or no evidence here to suggest that Guinness initiated cultural change.

It is not an easy claim to substantiate and personally I never subscribed to the theory that advertising generates cultural change. Yes ads hold up a mirror to society reflecting the spirit and mood, the ideas and beliefs of the time. Advertising is influenced by and indeed steals from a great many other sources – fashion, music, art, literature, sport, cinema and theatre.

Of course, these influences have a considerable effect on cultural change.

One might argue Roddy Doyle, say, or the Boomtown Rats, or Italia ’90, were responsible for a shift in the Irish zeitgeist that no advertising brand could ever aspire to – not even Guinness. While perhaps flattering to those in the industry, its unwise to attempt to credit advertising with the ability to create such change.

One could also argue that public service campaigns are the exception here. For example, anti-smoking and road safety ads can initiate cultural and behavioral change, but even then only in conjunction with changes to legislation and considerable financial penalties. What struck me while reading this book is the reverence with which the Irish public views Guinness ads.

GUINNESS ‘ISLAND’ CREATED BY FRANK SHEERIN AT ARKS IN 1977, WITH THE LINES “TÁ SIAD AG TEACHT” AND “ARÍS”

This approbation sits uneasily with a sizeable proportion of its back catalogue. The ‘Great Guinness Advertising ’ that has become part of modern folklore is portrayed here with a misty-eyed nostalgia that for this reviewer is often unwarranted. Described and contextualized here, TV testimonials from The Chieftains, Clannad and Elkie Brooks do not stand the test of time, in truth they felt pretty cheesy even when first broadcast.

The best forgotten ‘Big Pint’ campaign, created by HHCL & Partners after the account moved to London, was fortunate not to drive devoted drinkers away forever. The author suggests that Guinness and their agencies did not always display an understanding of their audience and I think she has a valid point. There are however some great examples of TV work.

Ad of the Century

They include Guinness ‘Island’, voted Ireland’s ‘Ad of the Century’ by Marketing readers in 1999 – a fact  not mentioned at all in the book – ‘Anticipation’ (1994) with actor Joe McKinney dancing around a pint to music by Perez Prado and ‘30 Seconds of Darkness’ (below) from 1974 – another odd omission – featuring Grieg’s Piano Concerto in A Minor.

These ads all still resonate as effective and powerful pieces of work.

So do poster executions like ‘Familiarity breeds content’ with a settling pint visual and the hurling sponsorship ‘It’ll be Hell for Leather’, with the battered sliothar visual. Terrific stuff, simple and smile-inducing. But there also was a surprising amount of routine, run-of-the-mill work. Not everything was wonderful, iconic or evocative, despite our collective impression. 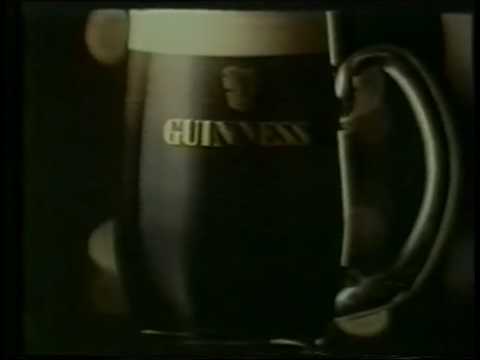 While I worked on the brand, I saw how its ads had a hold on Irish people. I’ve lost count of the speculative offerings sent into me, many via the Diageans in St James’s Gate, from young and old, students, would-be creatives and devoted pint drinkers with the obligatory “I thought this would make a great Guinness TV, poster, press/radio ad” note attached.

Invariably it wouldn’t, but it did show the way the brands advertising was embedded in the Irish psyche like no other. I never received similar submissions working on other big Irish brands such as Aer Lingus or Kerrygold. Clearly the black stuff had that certain magic. I suspect that is why the author felt it would make a compelling thesis.

It’s just a pity I found it a less than compelling read.

Advertising the Blackstuff in Ireland 1959-1999 (Peter Lang) is written by Dr Patricia Medcalf and published by Peter Lang, with notes by John Fanning and Patrick Guinness. Dr Medcalf is a lecturer in marketing and advertising at TU Dublin