The ASAI and the PRII are scrambling to regulate it. A number of Irish social media users have made it a full time career. There’s a host of agencies offering it and brands are pumping investment into it. ‘Influencer’ marketing is big business. So isn’t it time we started really analysing its value? There are a number of trendlines behind its rise.

For brands, attention is hard to come by, adblocking is on the rise and consumers have become used to avoiding ‘traditional’ ads. Partnering with an ‘influencer’ is seen as a good way to authentically communicate with a big audience using a trusted third party. As with investment growth in ‘native’ advertising and content marketing, the influencers are another way for brands to cut through the noise in a different way.

Edelman’s Trust Barometer says Irish consumers are among the most cynical in Europe. The distrust extends to brands. So third party verification from a trusted source, someone you follow and engage with in social media, can pay dividends. It’s why Under Armour, Nike et al spend zillions on sports stars endorsing their brands.

But there’s a catch. It only works if there’s real authenticity around the endorsement. In theory, in a small market like Ireland, the influencer approach should be great, since it’s easier to communicate with much of the country. In practice, because we’re such a small country, influencer marketing is quickly wearing itself out.

The depth of Irish ‘influencer’ talent is more paddling pool than overflowing lake.

Many bloggers have become polygamists and damaged their credibility by endorsing anything that pays, from food brands to credit unions, from telcos to energy brands. The great influencer gold rush has resulted in overuse by brands and agencies. Credibility is being lost. 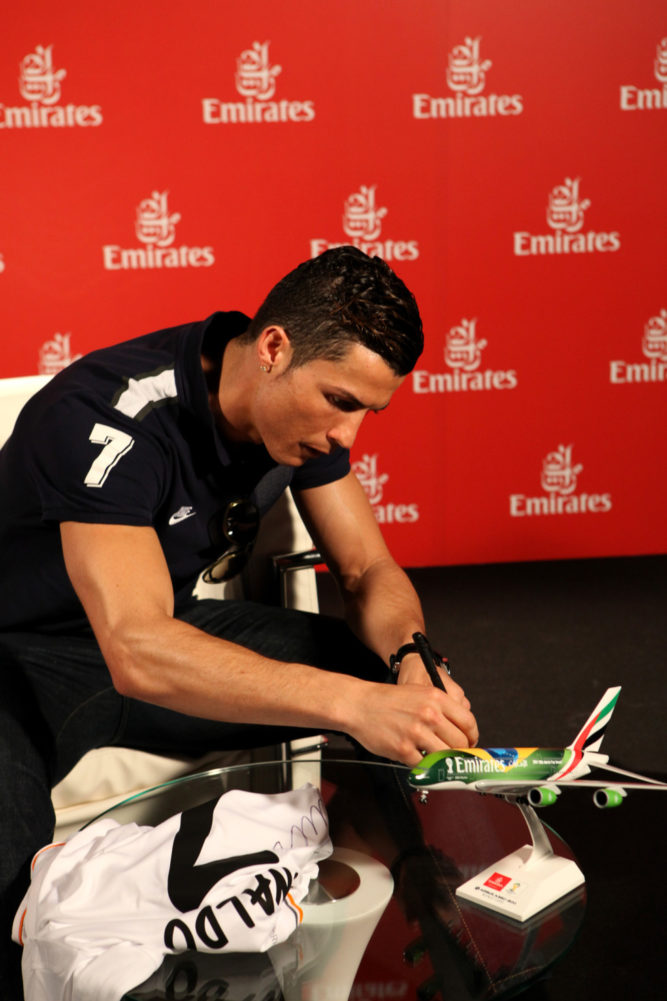 High achiever: Real Madrid footballer Cristiano Ronaldo pictured at an Emirates photocall. Many brands have deluded themselves into thinking that hiring social influencers can do a similar job to hiring top superstars in helping their brand stand out. But there is an argument to suggest that the influencers are diluting brands rather than differentiating them.

There’s also a paradox at the heart of ‘influencer marketing’. Styling yourself as an influencer is often a signal that you carry no real influence at all. ‘Influencer’ is not something you do; it is something that happens because of what you do. It’s like ‘the-famous-for-being-famous’ in press and magazine social pages.

Many brands have deluded themselves into thinking that hiring social influencers will help their brand stand out. But, in fact, there’s an argument to be made that influencers are diluting brands rather than differentiating them. Is a few Snapchat posts from a person who’s also being used in other brand campaigns going to provide any benefit? What’s the long term payoff for the business beyond a nice vanity metric to show?

Irish brands are starting to question the enormous sums required to work with such ‘influencers’. In most cases, you’re paying way over the odds (on a CPM basis) to access an audience that you could reach elsewhere in a manner that the brand controls. Return on investment is incredibly hard to measure in most cases, and therefore for a brand manager, it’s a tough expense to sanction.

There’s a feel of ‘bubble’ about the whole thing. Certainly, influencers have a place in the marketer’s arsenal. There are some ethical bloggers and social stars who hold influence and work well with brands. But for every one of those there are plenty with ludicrous rate cards and charging thousands for a blog post that delivers nothing.

It’s the worst kept secret in entertainment that many of our favourite movies, books and TV series are based on a decades old narrative structure. Joseph Campbell’s Hero Journey was the basis for Star Wars. The arc revolves around a protagonist who experiences a crisis, goes on an adventure, wins a victory, sometimes wins a fair maiden, and then comes home transformed. Sounds familiar, right?

The way we tell stories in ads takes a similar approach, because traditionally, we’ve built narratives for a passive environment. With TV advertising, the big reveal almost always happens towards the end, after a big lead in and before some brand message. Just like the ‘hero journey’, this slow peak pitch worked for decades.

But how we consume video is changing. With units like social video or pre-roll, viewers can choose to skip more easily. Often, sound is off too, creating another challenge. To optimise attention in the mobile feed, brands need to cut to the chase quicker. Heineken senior media director Frank Amorese sees Facebook as a billboard message delivered on a mobile phone. It may sound reductive, but it makes sense.

Facebook advises brands to aim for ‘thumbstopping’ content that gets to the point quickly. Advertisers need to front-load messages. There needs to be something eye catching early in the piece to draw in the viewer. Social publishing brands like Buzzfeed, Now This News and The Dodo master the new approach, but many advertisers are still choosing to shoehorn traditional TV spots into the round hole of digital video.

The narrative arc of our ads must change if we’re to be more creative.

Shane O’Leary is strategy and insights manager with Group M